Pools are expensive: Our yearly costs 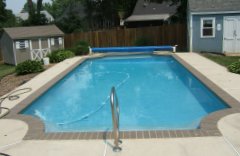 Thinking of installing your own pool? Want to know what to expect regarding yearly pool maintenance?

We purchased our home in 2004 (that’s our pool in the picture), and the previous owners had already closed the pool when we moved in. The pool is in-ground, about 13,000 gallons (33×15 feet), and is NOT heated. The previous owners generally hired a pool company to open, close and perform any repairs on the pool.

Since I like saving money by doing work myself, I’ve only hired a pool company one time (to open the pool the first year). Since then, I’ve done all the maintenance and repairs myself. I’ve saved quite a bit of money, but pools are still expensive to own!

Before I detail our yearly costs, I don’t have a way to split up our pool usage from our regular home usage, but I will estimate that during each pool season, we use an additional $500 in electricity and $70 in water (to top off the pool). For those of you not familiar with pools, we DO keep the pool filled with water year-round. It would be a major waste of water, and an expense to fill, had we drained the pool every year. Now, without further ado, here’s our detailed 3-year pool cost history:

As I said, I paid someone to open the pool, but I paid close attention to their process. Stacie, a friend and I did the hard work by removing, cleaning and storing the very heavy pool cover ourselves. The pool guys came in, unplugged a couple pipes, assembled a few things on the pump and poured in the chemicals that I bought. Cost to open the pool: $210.49. The guys were there for less than 30 minutes! And that’s why I learned how to manage our pool myself.

The rest of the year’s cost includes the following:

Total Year 1 costs: about $1025 (plus electricity, water, and insurance)

Our pool costs in year two decreased dramatically. The only major expenditures were pool chemicals, but I also had to figure out the fiber optic lighting system that stopped working:

Total Year 2 Costs: about $388 (plus electricity, etc.). Overall, year two was pretty calm. However, we didn’t swim much because we were so exhausted from training for our first marathon. Also, it was just too darned hot to go outside!

This year, we still spent hundreds of dollars, but I’ve gotten wiser. I did some research and found out Sam’s Club sells pool chemicals for MUCH cheaper than the pool stores. Also, I bought in bulk at the beginning of the season, since I knew the most common chemicals I’ve been using. I should actually be fully stocked for the rest of the season, and at the current rate of use, I might actually have leftovers for next year:

Year 3 Total Costs: $862, and still counting. We may buy some new pool toys and games since we’re having a pool party later this month, and I may need a few random chemicals to finish the year and to close. I expect to finish the year just under $1000 total.

The pool pump and thermal cover should be good for 3-5 more years, but next year, and each additional year, I’ll need to keep buying about $200-400 in chemicals. Also, our automatic pool vacuum (ours is a Jandy RayVac) is wearing down, and replacements are about $500 and up.

So, still thinking about installing your own pool? I can only recommend it for families with a number of kids, and even then, would recommend an above-ground pool. If you live in a community with a pool, I bet you’ll be hard pressed to pay more than $100 a year for family pool passes, and you don’t need to worry about pool maintenance. You won’t have the freedom to swim whenever you like, or the privacy to have a party with just your friends and family, but is it worth $40k plus hundreds or thousands in yearly maintenance? Oh, and don’t forget about extra homeowner’s insurance and probably a privacy fence (required by law in our county).

We’re “lucky” to have inherited the pool for only a marginal cost when we bought the home, but if I had the choice, I would have taken our home without the pool for the same price. What do you think? Do you have a pool or are you thinking of buying one? Have a better or worse experience?