As you know, I did some major repairs to our pool pump and pool plumbing. I recently spent $400 on a new pool pump, which runs like a dream compared to the old one, but I had even more work to do. Before I replaced the pump, I had to repair some PVC lines. I’ve never done plumbing work before. I used too weak of a glue, and cut some fittings too short, so I had to replace some of my work (a couple times). The plumbing work continued during and after the pump install too.

Those 5 parts shown above cost a total of $85 plus tax, and were used when installing the pump. They’re almost completely plastic (only some metal in the 3 valves.

Why so expensive, and why did I need them? 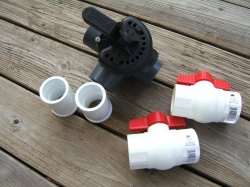 First off, pools are really expensive to install AND to maintain. If we didn’t have the disposable income to maintain our pool, we would drain it and keep it covered. A pool is a luxury, not a necessity. We didn’t install it, but we agreed to buy it since we bought the house.

When I installed the pool pump, I messed up on the inflow and outflow connections. Luckily this new pump had threaded connections, so I could just buy replacement parts. The last pump had the PVC glued directly onto it. The 2 white tubes on the left in the picture are those replacement parts. $10 each, and I didn’t even buy the threaded sleeve or gasket (already had those). Cost: $20.

Next up were new 2-way valves (the white things with red knobs) from the pool into the new pump. I opted for heavy-duty valves from Home Depot, rather than the Jandy valves from the pool shop. The Home Depot valves were actually quite a bit cheaper anyway. Still $10 each. Cost: $20.

Last is the big, black, 3-way valve. That was originally $60, but I got it on sale for $45. You can’t find one of those at a Home Depot! It’s meant to feed the water from the pool drain and the skimmer into a single line to the pump. You can alternate the flow between the two intakes, or let both run. Cost: $45.

Total cost: $85. And that doesn’t include all the PVC I had to keep buying because of my mistakes! I’ll write up one more post on the total costs of the project, and maybe even how much it would have cost had I not made the mistakes. However, I never called a plumber because I wanted to learn for myself. I figured working with PVC outdoors would be much safer than metal or PVC piping in the home. Now that I had my practice, I’m more confident of doing some bathroom remodeling in the next year or so.

There’s always something to learn!