Our Journey to Debt Freedom: The Ultimatum 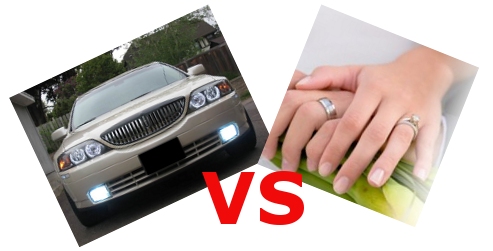 I’ve laid out how we got into most of our financial mess prior to even getting married, and I left you with a cliffhanger at the end.

In the next article, I’ll talk about the months leading up to our wedding, including a decision that nearly resulted in our separation.

Our engagement period was a rocky time. Stacie moved down to D.C. in 2002 to take an unpaid internship for 10 months as part of the requirements to be a registered dietitian (R.D.). While I already lived in the D.C. area, I was just renting a room in a friend’s house, and so I wanted to have a place for Stacie and I. In addition, Stacie’s internship was about 30 miles away from my place, with traffic, so we looked for something closer for her. That’s how we ended up in Rockville, MD, even though we’ve both worked in VA (or PA) for almost all our time here in the D.C. region.

We found a one-bedroom apartment with pretty good rent at $1000 per month, including utilities (except cable, phone and internet). It was near the major highway I took to VA for work, and close enough to Stacie’s internship. Although we were only earning one income, I was making enough to pay the rent and minimum on all the other bills. But we weren’t getting ahead either.

The straw that broke Stacie’s back

I’ve already mentioned countless times that I have a problem with wanting new cars. I don’t have many vices, but admiring and wanting cars is one of them. It’s not the “look at me” factor, but rather something I still haven’t figured out. But I was soon to learn one possible reason from Stacie.

Sometime in the winter of 2002-2003, I had time after work and instead of driving home, I drove to the local Lincoln dealership. I really don’t know why. It’s probably the same reason I drove onto the Acura lot (and drove away in a new Acura TL-S). I was bored and I was looking for change. I wasn’t tired of my Acura as I only had it for a year, but I got intrigued at the Lincoln LS sedan. And there before me on the showroom floor was a Lincoln LSE (the E was a special edition of the LS with a more powerful engine and some bodywork).

See, I just stepped into the showroom to look at what they had. Maybe sit in a few cars and then leave. But then I got chatting with a salesman. I went for a test drive. I started negotiations.

I ended up one signature away from trading in my Acura for the Lincoln.

During this time, I had called Stacie to let her know where I was. I didn’t tell her how serious I was about the car, but to just come by on her way home. Perhaps it was a subconscious cry for help. Luckily, Stacie showed up in time, but what erupted was something for which I was totally unprepared. You see, they had already cleaned up the LSE and even moved my license plate from the Acura to the Lincoln. I was literally just one signature away from closing the deal and driving home in a new car.

Then Stacie broke down in front of me. She gave me an ultimatum. It was her or the car. She just couldn’t take both my constant desire for change as well as the threat of even more needless debt. She was worried that if I changed such big things as cars so often, how hard would it be for me to want to change her for someone else. And she was right; I thought of cars as just cheap gadgets that you swap out when you want the latest. I don’t know if I would ever make the leap to “swapping her out”, but she had a point.

I was in a jam now. It wasn’t a hard decision on what I wanted more, Stacie or the car, but I had just spent about 4 hours of this salesman’s time, well past business hours, and he was on the cusp of closing the deal. I had to throw away my pride and tell him the deal was off. At least I could explain my fiance would leave me otherwise, but it didn’t seem to help much. He actually asked “Why didn’t you ask her before we started?”. I replied that “I got caught up in the process and didn’t think about what I was doing”.

In this case, I was able to back out of a major financial disaster (although we still continued to make a few in the coming years), but it shocked me into always considering the cost, both financially and emotionally, of my addiction to spending. I seriously almost lost both my best friend and my future wife (both the same person) over a car. And not even that good of a car either (sorry Lincoln LS owners).

While I don’t believe I told many people about this incident, I did tell some friends at work who knew I had a car problem. I was open and honest that I screwed up, and I think some of them, who were also young, frivolous spenders like me, also learned a piece of my bitter lesson. I went on to keep the Acura for another 3 years, just shy of 100,000 miles, and traded it in for my Honda Ridgeline, which is going on 4 years of ownership now. I most definitely still have the urge to get a new car, but I always have that haunting experience in the back of my mind to remind me that it’s not just me in this equation. I have a life-long partner that also has to live with my decisions, whether good or bad, and who is also much wiser than me when it comes to spending.