It’s been just over 2.5 years since posting my first article “Is Running Really a Bonding Activity for Couples?“, back when I was training for my first (and so far only) marathon. In that time, I’ve switched to writing more about personal finance than anything else, but I still like to comment on marriage and relationships, and anything else that runs through my brain here at CleverDude.com.

Well with today’s article “Dead Stores = Dead Malls = Unruly Teens in Your Hometown“, I return to my roots of writing absolutely nothing about personal finance, as well as posting my 1000th article here at Clever Dude!

Technically, I’ve hit this milestone already, but I’ve had to delete some affiliate articles recently, which helped keep me from hitting the 1000 mark until today. But today I have real proof of the totally arbitrary multiple of 10: 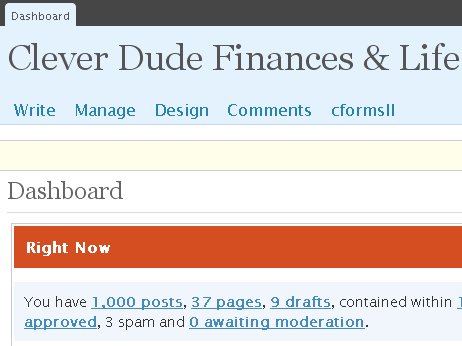 Thanks to all you readers who kept me going on this site (and the advertisers whose money helped just that much more). If I didn’t have an audience, I think talking to myself would have gotten pretty boring.

Although it’s taken me 30 months to write 1000 articles, I suspect the 2000 mark will come a little more quickly, considering I didn’t really write anything for the first 6 months of this site.

And as an aside, you’ve commented 6,810 times on this site. Since I don’t allow pingbacks from my own articles (much less pingbacks from any other article now), those are almost all handwritten comments from you, the reader.

While other sites have reached these numbers much more quickly than I have, I don’t care. This is an accomplishment worth noting in my own personal life, along with the marathon I finished in 2006, skydiving in 2001, and oh, getting married in 2003, among a couple other personal achievements. The next on the list? Finishing my masters degree in 2009!