When the questions about “having kids” go too far 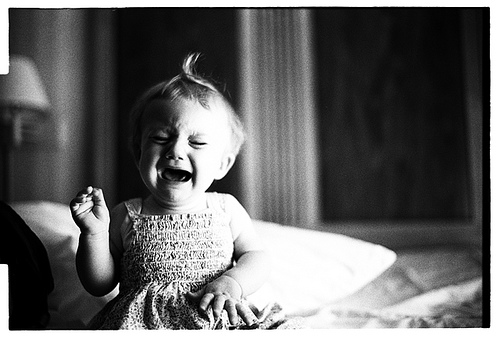 NOTE BEFORE READING: This article is not meant to alienate those of you with kids, or even those of you who have asked us about having kids. This is an article merely to illustrate our point of view of the “DINK Dilemma” (Dual-Income, No Kids)…

When you’re single or dating someone, the inevitable question from friends, families, coworkers and even strangers is “So when are you getting married?”. Normally you’re too polite to respond, or you just try to laugh away the question. It’s especially bad when it’s your date’s first time meeting the family and you’re asked that question. Nothing like a little pressure to make that guy (or girl) run for the hills!

And when you finally marry that guy or gal, what’s the next obvious question?

Question 1: “So when are you two having kids?” or “When am I getting grandkids?”

This question can be in both accusatory and innocent styles. The accusatory style tends to come from your parents who are wondering when you’re going to give them grandchildren. They’re so used to the parenting role that they have nothing else to do except dream of parenting YOUR children, or showing off pictures of your kids to their friends and coworkers as if they had something to do with the mating process (ew! I hope not!). Siblings and other relatives may also ask, wondering when they’ll be aunts, uncles, great-grandparents, etc. Luckily we only have one member of our families who continually bugs us about kids, but I won’t mention who.

The innocent style comes from friends, acquaintances and strangers just finding a way to strike up conversation. Perhaps they have kids and talking about their kids is much easier than talking about themselves. Unfortunately, this line of questioning can often backfire, specifically when the questioned couple is having difficulty having children.

This question usually comes from people you just met who assume you have kids because they see the ring on your finger and the gray in your hair. They automatically assume that anyone who is married MUST have kids, regardless of their physical capability to birth a child or desire to have a child. This is actually a pretty insulting question unless you KNOW that they do in fact have children, but for some reason some people start off with this question, or similar one like “What school do your kids go to?”

Statement 1: “Oh, I’m sorry if you can’t have children”

You might notice that we’re getting into more and more insulting questions and statements. Since Stacie and I don’t have kids and we’re now in our 30s, some people automatically think that we’ve tried to have kids and have failed. Honestly, I have no idea if we are biologically capable of creating and carrying a child to term, and aren’t ready to test out our hypothesis that we can anytime soon. I do understand that the questioner is trying to be sympathetic, but don’t assume that couples without kids are unable to produce them.

Statement 2: “You should have kids now. You’ll regret not having them when you’re X years old!”

Ugh. The alternate to statement 1 is this one. Again the person assumes that every married couple only got married to have kids. While this may have been a necessity for people as recent as 50 years ago, perhaps we got married because we’re best friends and love spending time together, and we may choose not to have kids.

I understand the biological probabilities of having a less-than-healthy child the older you get, but this statement is wrong on so many levels. This is where I relay the story that sparked this whole article.

When a coworker just can’t get the hint

I tend to stay away from talking about family or work issues directly on this site out of fear of retribution, but some statements by my wife’s coworker just irked me so much that I needed to write this article.

To set the stage, this certain coworker is in her late 30’s and has 2-year-old twin boys. She just started working with Stacie and, having double the Terrible Two trouble, kids were the only thing on her brain. One of the first questions to Stacie was “Do you have kids?”. When Stacie answered “No”, she then asked “Why not?”.

I’m sorry lady, but we don’t need to tell you why we don’t have kids. But Stacie, being the nice, polite woman, explained that we’re just not ready for kids. But then the coworker couldn’t leave that alone. She then went to Statement 2 that we “better not wait” and “you’ll regret not having kids”. Stacie just brushed off the questioning and got back to her job.

In subsequent conversations, specifically ones about kids, the coworker would state, as if a fact, “when you have kids…” and then go on to relate some wise parenting advice like Stacie asked for it. Stacie came home angry a number of times because the questioning and assumptions were getting to her. I decided it needed to stop, and being the blunt and rude person I am, I looked for an opportunity to speak with this lady.

Just before Christmas, Stacie broke her finger (long story). We didn’t think it was broken that night, but at work the next day (she works in a hospital), her finger turned ugly purple and swelled up like a hotdog. So I met up with her in the ER where she works (as a note, the knuckle chipped in two spots).

After she got out of the ER, she had to go back to the office to get her things. While there, we chatted with one of her other coworkers for a while. As we were preparing to leave, the “baby mama coworker” comes into the office. Stacie introduces me to her, and while Stacie finishes the conversation with the other coworker, the baby mama immediately starts off the conversation with “Oh, when you have kids…”.

I don’t let her finish, and still don’t know what she was going to say, because I correct her by saying “IF we have kids”. I don’t think I gave her my infamous “crazy eye”, but she switched topics immediately. Perhaps she finally got the hint that kids aren’t planned for our immediate future. Shortly after, we said our goodbyes for the night and headed home.

Well, the next day at work, baby mama tells Stacie about our brief conversation. Apparently, now she thinks I’M the reason we’re not having kids. She thinks I’m the controlling force telling Stacie we don’t want kids. I’m sorry, but it’s an equal split between Stacie and I. So now baby mama is on a mission to convert me, via Stacie, to see the light of day and the wonderfulness of kids.

I will honestly admit that there are many times both Stacie and I question ourselves and each other whether we’re making the right decision to wait for kids. But then we remind ourselves that we enjoy the freedom in our lives and careers right now, and agree it’s best to wait. Neither of us is the controlling force in the decision, but I will also say that birthing a child is not our primary desire.

Options for kids when “you’re too old”

I’ve previously covered all this in “Examine Your Motives: Having Kids“, but I’ll recap. As I’ve said, people keep telling us “don’t wait too long or you’ll be too old to have kids”. But we just brush it off because we know we have other options for having kids:

So while we continue to consider whether we want (or should even have) kids, we’re comforted by the fact we have numerous options if it “becomes too late” to have a biological child. I shudder at the fact, though, that we’ll have to deal with prying questions and insulting assumptions for the next decade or two, or unless we have a child.

And for those of you who just realized that you’ve been guilty of questioning your friends, or strangers, about when they’re having kids, consider this: People grilling us about kids only makes us want kids less. And hearing you say “those little moments where my kid does x makes it all worth it” doesn’t make us want kids. It shows that you become numb to all the pain that kids cause (lack of sleep, stress, communicable diseases…and don’t get me started on puberty!).

Ok, done with my rant. Any questions or comments?