Temptation in the Workplace, and Accountability

Reader and commenter Rob, who owns a full 1% of the comments here at Clever Dude (we have thousands), posed a question to me via email this past weekend. We had a good discussion of ideas and I got his permission to write about it. I will warn you that this article is lengthy. 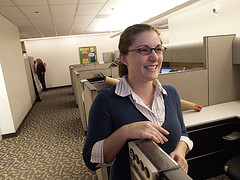 Rob emailed me about a problem he began encountering at work with regards to a female coworker. As a preface, Rob has read my “Guys, Protect Your Hearts” and “Bounce Your Eyes” pieces, which is why he sought me out for some more help from a guy’s perspective. Here are Rob’s words (with bold emphasis added by me):

Mike,
Let me start off by saying that the only reason I’m sending this to you is because I get the impression you are the type of guy that I would have met in my old church men’s group. My previous men’s group is very near and dear to my heart, but I’ve moved away and now it’s not as easy to talk with my fellow ‘brothers’. The other thing is I’m at work right now (yes I read Clever Dude at work) and need to ‘spew’ the junk that’s in my head to someone, and tag, you’re it.

I’ve been married for two years to a wonderful woman. No complaints there. Throughout our dating period, I had to justify our age difference (7 years) to myself though. At the time, I knew that I couldn’t marry her until I came to terms with the age difference. Eventually I accepted it and proposed. What’s followed has been a great two years. It’s not a perfect marriage, then again what is?

Recently though, I’ve been put in a position at work that forces me to with someone with whom I get along really well with. This woman is my age, and well,.. we’ll just say she’s “my type of girl”. Don’t get me wrong,.. it’s not that she’s drop-dead gorgeous or flirty or whatever. She just is the type of girl I would easily consider a friend. The trouble is, when I was single, that was the same type of friend that I would end up dating.

Here’s the thing though,.. we’ve only just started working together (for only about an hour out of the day) and my alarm has already tripped, telling me that I need to be careful. Once again, it’s not like I have this insatiable desire to be with her. It’s much more subtle than that. But at the same time I know that subtle situation can creep up on you and become a full on war zone before you know what hit you. The other thing is that I found myself thinking “I wonder what it would be like if I married someone like her – you know, closer to my age” as we were talking casually. The last thing I would want to do is betray my wife, and I sincerely doubt that anything would ever happen between this woman and I. But then again, how many cheating spouses ever expect to cheat on their partner?

I guess I’m writing this to vent and also to get some sort of accountability. You don’t necessarily have to reply, but if you want to through your two cents in, you are welcome to…but either way I like reading your posts and gathering your insight. – Rob 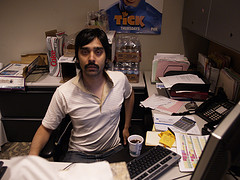 I responded by admitting that I also had the same problem at my old job, but I don’t have the age difference to consider as well. Honestly, I had lustful eyes, but because I was in a professional setting, and because I was married, I refrained from any type of flirting. It was a major challenge because my nature is to be friendly and talkative to people around me. Also, the “other woman” was on my team, sat one desk away and we worked on a number of problems together.

The fact that Rob already recognized that gut feeling that things weren’t right is a major step in the right direction. Many men just ignore this and flirt, without realizing what that feeling really means. It’s always easier to dispense advice than to give it, but here goes:

In my case, I’m always completely honest with my wife, even when it hurts. Thus, my wife knew about my coworker attraction early-on. Openness has just been a part of our relationship and it’s worked, even if I’ve often had to force myself to tell everything. Sure, sometimes I give little white lies, but holding something big back could really come back and bite hard (literally, she has sharp teeth!). If, in his marriage, his wife knows him as always honest and forthcoming (i.e. not just tell the truth when she asks the right questions in the right way), then perhaps it would be good to get this out in the open early on.

Unfortunately, many aspects of this situation are an “it depends”, as are most things in life. I agree that it’s important to be accountable to someone, but usually it’s best if it’s someone physically nearby such as his wife or best bud (as long as the bud has the morals he needs in the situation). It needs to be someone who can monitor his progress, but if he still needs a sounding board, I’m here, as I am for all of you. The reason for my site is to help people, as well as myself, in our physical, spiritual and financial journey.

One thing I wrote about in “Guys, Protect Your Hearts” is that temptation starts innocently. You like the girl as a friend, and then you feel like you bond with her more like your wife. In certain work environments, you’re with her just as much or more than your wife. You start to compare her with your wife, and then things go downhill. Why? Because “the grass is always greener on the other side”. You begin to think that the other woman doesn’t have the problems that your wife has, like self-esteem, stress, or other problems or shortcomings such as sexual prowess.

It’s all a lie that you begin to rationalize into truth. No man or woman is void of issues. We all have baggage, and even Playboy models are airbrushed. Real-life doesn’t have an airbrush, a mute button, or an eraser. You can’t ignore your problems and hope they go away. You have to deal with them or they will keep compounding until something bad happens, such as divorce, bankruptcy, jail or death.

So Rob, I’ll be here to help you out, but keep in mind that I can only bring my own perspective to the problem. I’m not a professional, and even professionals can’t fix the problem for you. It’s up to you to handle the situation and take initiative where it’s needed.

And for my other readers, feel free to ask for my opinion (note I said opinion, not answer) for any problems you might have. If I don’t think I can be of help, I won’t BS you, but I will try to refer you to someone or something more capable of helping.