Hot on the heels of writing “Trying and Buying Musical Instruments the Wrong Way“, I’d like to announce that one of the last major stupid purchases from college is officially gone: my 5-string Washburn XB-925 Bass Guitar, which I bought for about $1,100 on credit back in college (along with thousands of other guitars I never learned how to play). 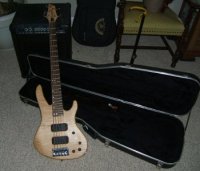 A few weeks ago, I was contacted through this site by an interested buyer from Belgium. Yeah, the country in Europe next to, um, wait I know this. It’s next to Germany. Anyway, I’ve gotten so many Craigslist scam emails from “oversea buyers” that I immediately wrote this one off as a scam. However, this one was different because the buyer was persistent. I got more and more information and did some digging, and eventually decided he was about 80-90% reliable.

However, shipping was over $300 to Belgium, so I said I didn’t want to deal with shipping. We found a third party through a well-known bassist forum (who I did research on as well). I decided to make the deal.

I received about $750 via Paypal, and waited until it was transferred into my bank account before setting up the pickup date with the shipper. However, in the meantime, I got the buyer to agree to terms that he would not hold me responsible for the quality of the bass or loss of the bass once I handed it over to the shipper. This agreement hinged on the shipper inspecting the bass and agreeing it was in at least “near new” condition.

I wrote up an agreement with the shipper for them to agree they would ship the bass to the buyer in a timely fashion and would accept full responsibility for damage to the bass or failure of receipt by the buyer. I met with the shipper on a sunny Sunday evening, he inspected the bass, we chatted about his family and band and his wife’s MINI Cooper, he signed the form and we finalized the hand-off. I said bye to the bass as it rode off into the sunset (well, up to Baltimore).

Granted, yes, this could be a well-planned scam. Heck, I could be scammed by anyone, but I chose to protect myself by doing extra research into the supposed buyer, as well as covering my butt with digital and physical signatures. If the buyer claimed fraud with his credit card issuer or Paypal, I have documentation that I performed the hand-off and he agreed to not hold me responsible. It’s always a risk.

I do have to say I was more sad to see the bass go than when we sold our Malibu. Why? Because the bass was part of my dream to be rocking in a band. It hit me harder today when I was listening to Reel Big Fish and “Beer” came on. It’s a simple bass riff, but it’s just an awesome song, and I knew how to play it. I was sad, but knew wearing spandex and a spiked wig on stage wasn’t meant to be.