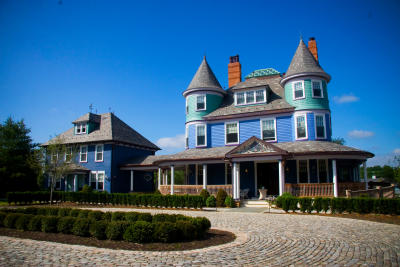 In my weekly roundup, I told you that we were celebrating our 5th wedding anniversary this past weekend. However, my plans were a secret because I wanted to surprise Stacie. Now that the weekend is over, I can tell you what we did:

While I wanted to stay somewhere away from our home, I didn’t want to go too far. I also didn’t want a regular hotel, so I opted for a bed & breakfast. While searching for something else (see below), I found Slades Inn, located close to the PA/MD border, north of Baltimore, MD. We chose the “Full Cry” room (there’s a horse theme), which had a private bathroom with jacuzzi tub and “spa shower”. The shower had 5 nozzles on 2 walls (total 10 nozzles) and fit 2 people. cough…

Cost of the room: $275. Yeah, pricey, but we wanted to enjoy something nice, and Slades Inn was nice, and historic:

According to the The Maryland Commission for the Celebration of the Bicentennial of the Birth of George Washington, it has been definitely established that Washington, journeying between Baltimore and Philadelphia by way of Old York Road, did stop at Sladeâ€™s Tavern, located on â€œMy Ladyâ€™s Manorâ€ for breakfast on June 6, 1773.

â€œMy Ladyâ€™s Manorâ€ was once the hunting and camping grounds of the Piscataway Indians, a southern branch of the mighty Susquehannock tribe.  In 1667, Charles Calvert, the third Lord Baltimore, passing through this area on a trip north to make peace with the Indians, decreed that he would reserve 10,000 acres of this fair land for himself.  In 1713, he made a â€œgiftâ€ of this land to his fourth wife and declared that it would be called â€œMy Ladyâ€™s Manorâ€ in her honor.

The house is old, but the owners did a tremendous amount of work to get it to top-notch condition. The house is huge, and has numerous rooms. Each room is different, and since we were the only ones staying that night (except a couple in the adjoining house), we got a chance to peek at the other rooms. I think we got the most appropriate room for our celebration, but all the other rooms were gorgeous too.

Friday night, we grabbed dinner at Manor Tavern, just across the street from the Inn. I surveyed the menu beforehand and accepted the prices ($17-$25+ range). They’re actually not too bad for our area for such a nice place and quality of food. Plus, if we wanted to cut back on costs, they have sandwiches for much less. We wouldn’t eat at this type of establishment normally, but it was a special event.

Before dinner, I decided to have a drink so I ordered the Snickers Martini. I can’t remember what it contained, but it was EXCELLENT! I almost licked the glass clean! (it had chocolate syrup and crushed peanuts to simulate a Snickers bar).

For dinner, I ordered the “Low Country Shrimp & Grits“:

The shrimp were large, plentiful and cooked just right (not chewy, not “fishy” tasting), and the grits were thick and creamy. It was more than enough food so I’m glad we didn’t order appetizers.

Stacie, being the picky eater, did find something she liked, with some modifications. She chose the special of Halibut over garlic mashed potatoes with asparagus. It would have come with hollandaise sauce and crab, but she got the crab on the side (which I ate) and no sauce. She’s such a healthy eater.

We finished up dinner by sharing a caramel apple crisp, which was just the right portion and sweetness to satisfy our craving. I was really tempted to get the chocolate volcano, but I think it would have been too rich for our tastebuds.

Total cost of dinner (including tip): $73. My martini was about $7 (but they gave about 2 glasses-worth), and dessert was about $6. The rest was tip and entrees. It was less expensive than our first anniversary dinner at the Kennedy Center Roof Terrace Restaurant. That one was well over $100, and I don’t think we even had alcohol!

In the morning, back at the Inn, we were treated to two options for breakfast in the spacious dining area. While I dined on eggs and fried tomatoes with bacon, Stacie ate a Belgian waffle with caramelized apples and bacon (which I ate). We also had apple muffins while waiting for breakfast. We found out later that the cook was formerly a restaurant chef for years, but retired and is now working at the Inn.

During breakfast, we were treated to a show with dozens of runners going by on a road race. We also enjoyed the company of a couple from Sweden, but were separated enough to have our own private conversation. However, our plans for the morning came up and I think they were a little jealous that they didn’t think of it too…

The inn owners are wise enough to offer additional “weekend getaway packages” to its guests. Now, the only reason I found the inn was because I specifically wanted to go horseback riding, and since the inn offered it, they came up at the top of the results. Stacie had never been on a horse and I’ve only gone once, but had fun doing it. I did find a few other B&Bs that offered horseback riding, but either the rooms weren’t as nice (but less expensive) or the riding package was much more expensive.

We paid only $50 for an hour for both of us, which was far less than the $150 quoted by another inn (for 90 minutes). The innkeeper has her own horse farm with almost 20 horses, so she took us out. I thought we would be with others, but surprisingly we were the only ones in the group. We had all the attention of the leader, which we definitely needed.

As I mentioned, Stacie had never been on a horse. She’s also never had a dog, a cat, or a pet of any kind. She’s nervous around animals, even tiny doggies, so I was definitely nervous about the riding. With horses, you need to show them you’re comfortable with them and you know what you’re doing. I knew Stacie would have trouble with this, but luckily the owner got her a relatively good horse.

I initially thought we would just arrive at the farm, hop on a horse, ride, come back and go home. However, we got the opportunity to actually go out to the pastures, lead the horses back to the stable, brush and saddle them, then ride. When we got back, we could have left then, but we stuck around to feed the horses, brush them again and then lead them back out to pasture.

While we were prepping for the ride, I made sure to use the time to bond with my horse, Jasper. I talked to him, brushed his hair, etc. Stacie did brush her horse, but then didn’t really talk or touch her horse (Frankie) to show she was comfortable with him. Uh oh. 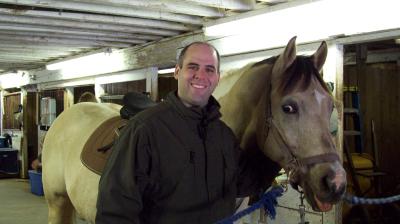 As you can see, Jasper thinks I’m a funny guy. Apparently he was so comfortable with me that he was laughing at me as Stacie snapped the above photo. Seriously, the one photo I have of me on the entire weekend and it looks like a horse is laughing at me. Sheesh, I can’t get no respect.

I won’t recap everything, but I will say that Stacie’s horse was a bit reluctant to cooperate until we got out on the trail and put him between me and the leader. The biggest problems were controlling him when going through the gate from the pasture to the trail and then back in. Overall, though, she had a fun time and wants to go again (now that she knows what to do). The photo below makes it look like the horse is smaller than it really was. In reality, it was taller than my horse, but less muscular. Stacie is walking up a hill and the horse is hunched down. 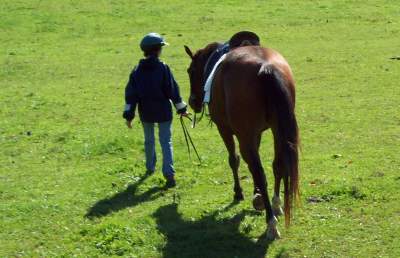 I, on the other hand, had a well-behaved horse, except for when he wanted to get past Stacie’s pokey horse and decided to trot. If you’ve ever ridden a horse, you know that even a slight trot will bounce you harder than if you sat on a jackhammer. Boy were my legs sore! Seems I have my own things to learn too.

Overall, we thoroughly enjoyed ourselves. It was a romantic weekend from the luxurious lodging and excellent dinner to a beautiful day of riding horses. I definitely want to ride again, but I think we’ll probably wait till the spring when the weather is warm again. And if you’re considering your own weekend getaway in the DC/Baltimore area, consider calling or emailing Nancy at Slades Inn! Ooh wait! I almost forgot something…

If you’re a member of Costco, they have a $100 Bed & Breakfast gift card that you can buy for $79.99. They may not have them at the store (call ahead), but they have them online (you have to pay shipping). My coworker had one that she wasn’t going to use that I bought from her, but I didn’t have enough time to get my other coworker to use his membership to order 2 more online for me.

If you’re not a Costco member (which I’m not), you have to pay an extra 5% or so on your order, but you CAN still order. It may not be worth the cost of shipping plus the fee to order it unless you’re getting 2 or more.