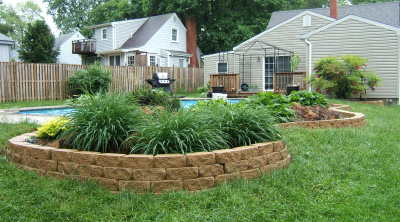 I mentioned that the second thing I did all weekend was “finish” our retaining wall, so I’ll explain a little more. I started digging the 55ft section of wall along our pool on May 2nd, and it took about 5-6 hours of digging over 2 days to square out the area for the retaining wall bricks and level it out. That was by far the hardest and most tiring work of the whole project.

Pulling in a close second to the digging would be hauling 3 half-ton loads of gravel in my truck, shoveling it out, wheeling it to the backyard, then hosing out the truck bed. It doesn’t help when I fall back first onto the wheelbarrow though. I gotta say that shoveling gravel is not the easiest job.

And bringing up third in the tough jobs would be hauling about three-hundred 22 lbs bricks (counting the first wall I completed) for a total of 3.5 tons. Luckily on the last 2 loads, and one of the other ones, I had my neighbors help. I thanked them with a restaurant dinner, but we each used an Entertainment Book coupon so I really paid for 1 meal (plus my own).

I will say that I’m very proud of Stacie for how much work she put into the wall after the digging was done (that was all me). She helped unload bricks from the truck, haul them from the front (one-by-one), use the mason chisel to knock off the lip on the bottom row of bricks and lay down the gravel. For such a small girl to carry so many 22lb bricks is quite amazing to see 🙂

How Much Did It Cost?

I calculated that just this wall, with about 210 bricks and a ton of gravel (literally), along with a few tools like a mason chisel, heavy hammer and a tamper, cost about $500. The two walls together cost about $700 so far. But we have 30 bricks left over that will go towards finishing the first wall the rest of the way to the patio and also starting the third wall which will be a small one. And I’m not counting the gas used to drive to Home Depot or the stone yard about a dozen times.

What Tools and Materials Did I Use?

I already mentioned a few, but in order to complete this wall, these are the materials I needed. I’m using Amazon links simply because it’s easier to search for and show you some sample results:

Those are just the tools I used for our wall, but yours may differ depending on the type of wall, size of the wall and whether we even built it right or not.

So Why is It “Almost” Finished?

I won’t be happy with the wall until the following things are done:

So it’ll probably say “almost done” for some time, but I just can’t let myself say it’s done until at least #1-3 are done.

And if you ever need help with your retaining wall, don’t ask me because I don’t want to touch another brick for a long time, unless it’s to work on my own walls!