No, I don’t want to move to your state! 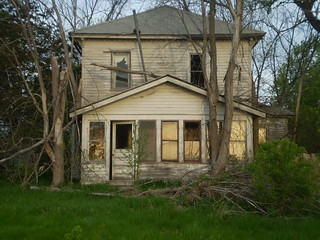 For 11 years now, I’ve lived in the Washington D.C. area (never in D.C. though). I first lived and worked in Virginia. The 20-mile commute was horrible, and this was 11 years ago. Traffic in the area has only gotten worse. I moved to a different city 6-7 months later, still in Virginia and still 20 miles away. The commute was less horrible, but still not ideal.

Then my wife graduated from college with her masters and moved down for an unpaid internship in the Rockville, MD area to complete her certification. That’s when we had to decide whether to stay in VA (crammed into a small bedroom and living with 2 other guys) or move to MD. We couldn’t really afford rent closer to my job, so it would have been a 20 mile drive for me still, and probably 30 for her. So that’s when we decided to move to Maryland. That was almost 10 years ago.

After 2 rentals in Maryland, we bought a home almost 8 years ago, near the height of the market when we actually couldn’t afford it without a crazy loan setup, but now here we still are. We are now debt free and have paid off 28% of our total home loan (it was 2 loans; one is paid off) and are doing well financially.

But my wife has been working in Virginia since we bought the house and I’ve mostly work in VA or in DC for the last 11 years. However, our friends in Virginia constantly ask us when we’re going to just move to Virginia and it’s getting really annoying! It’s not as bad as hearing “When are you having kids”, but they just aren’t understanding our decision to stay here.

One of those friends came to visit us this past weekend and brought up that question. She was actually looking at me as if I’M THE REASON my wife has a horrible commute and isn’t living closer to her work friends. In reality, it’s a very mutual decision to stay where we are for numerous reasons. This friend even suggested a few places for us to look (close to my wife’s work so she wouldn’t have to drive far as I mostly work from home) and I decided to look for some houses in that area while she was here.

We paid almost $400,000 for our house, have a good amount of space in a well-maintained home (even though it’s 71 years old) close to major highways and public transport. I would require a similar home in Virginia. However, I know prices are much higher where she works, so I bump the price up to $500k. We could afford even more, but I wouldn’t want to spend it.

I had to expand my search a few times, but every house was basically run-down and crappy (see above photo 🙂 ). To get a really good single family home, we’d have to live at least 10 miles from work, or else find a townhouse or condo. There are definitely pros to “living smaller” like having less stuff to manage and having a reason to purge stuff I don’t want anymore, but there are many reasons for us to still commute across state lines.

Why are we staying in Maryland

I mentioned there were a bunch of reasons we like where we are, even if I complain about the costs of owning our home. I’ve told myself, my wife and others that something big would have to happen to make me move elsewhere in the DC region. It would be different if one of us got a great job in another state, but moving within the same 30-40 mile radius just doesn’t make sense, and I’ll explain why.

For my part, while I work from home, I do go into the VA office 2-3 times a month, and down to DC or other regional locations for customer meetings about as often or less (thanks to internet meetings!). However, when I go into DC, I love to be able to take the subway, which is less than a mile from our house. If we move to Virginia, I know I wouldn’t have that luxury. Most of my coworkers live nowhere near a metro, and have to drive into the city. That’s not a fun commute because everyone else in the state (and West Virginia) are taking the same roads as them.

For my wife, she does commute 20 miles each way and it can be a painful drive most days. She’s learned to live with it, but I’m sure she wouldn’t mind living much closer to work. The problem is that for over half the commute, the houses along the route (off the few exits on the beltway) are multi-million dollar homes. No way we could move closer without moving into something smaller or farther away from work.

And if you live in the DC region, you’ll know that traffic within a 10 mile radius of the Tyson’s Corner region is just horrendous. There’s no “kicks” on our Route 66, just bumper-to-bumper traffic. Virginia’s “spoke and wheel” roadway design just doesn’t work with the huge number of cars in the region. However, the same goes with the parts of Montgomery County, MD just east of us. We live in quite a sweet spot where we can get to many areas relatively easily. But there’s a mental war between the two states; both think their traffic isn’t nearly as bad as the other’s.

Therefore, there’s little reason for us to move to Virginia versus staying in Maryland, but I’ll add a few more reasons for us to stay:

Granted, I would love to have a garage, a basement for storage and a man-cave, and a better heating/cooling system. However, the biggest thing is we owe half of what we would have to pay for a new house that would probably have as many pros/cons as our current one. It’s just not worth moving unless we got a major boost in our income and/or I no longer work from home. Even if we had 2 kids, we have enough space for them (the last owners did it just fine), and we’re near excellent schools.

So while we both work in Virginia, our friends and coworkers need to understand the full picture of why we won’t move to Virginia. The cost, the traffic and the lack of walkability all combine to make it less desirable than what we have now. Plus, we’d be that much farther from our families in PA.

How about you? What would make you want to move? Is being close to work worth the added cost and hassle of moving?