For some reason, Stacie and I never made it to the Montgomery County Agricultural Fair in the 5 years we’ve lived here, but last night we went. We were joined by Nick and his wife on this special “date night”. But it was no ordinary date. 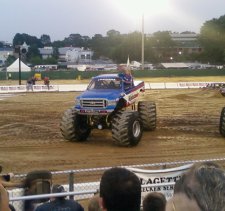 We went to a monster truck show! And we even got to see Bigfoot! I think I went to a MT show when I was really young, and I’ve watched them a number of times on TV. Actually in the hotel in New York 2 weeks ago, I watched monster truck races. They had a course across a parking lot and in an arena. But it’s not the same watching it on TV compared to in-person.

We also went to the “big tent” for a one-price meal that included fried chicken, meatloaf, veggies, pudding, and some drinks. It was $10 per person, and it was pretty much elementary school cafeteria food, but it did the job.

After dinner, on the way to the grandstands, we stopped by and checked out the pigs, cows, goats and sheep. Stacie seemed surprised that the pigs smelled. All the animals smelled, but the other livestock were on hay and mulch, which absorbed a good bit of the smell. I wanted to take Stacie on a pony ride, but we didn’t have time (yes, she’s small enough for a pony).

Last and not least, I finally got to try a deep-fried Twinkie! Yes, a heart-attack on a stick, with all its battery and creamy goodness. MmmmMmm! They had deep-fried Oreos and Snicker bars too, but I’ll have to come back for those next year. My wife is a dietitian after all!

The cost of our date night

Next year we’ll hit the tractor pull and demolition derby. Oh, and I’ll try the other deep-fried goodies. Maybe y’all can join us!