Lunch is on Me 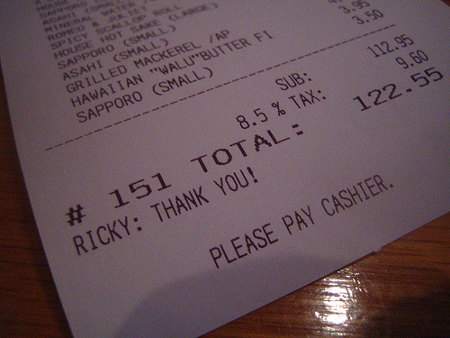 By a Clever Female Friend

The following article is a guest post by my best friend’s wife, who wishes to remain anonymous. You know my friend Shawn from his various guest articles on this site.

I have always heard that there are a few things that you don’t discuss in polite company: religion, politics, sex and money. Apparently, these topics are guaranteed to start a fight or cause offense and should be avoided at all cost, or so the cliche goes. Nowadays, I am not so certain.

It seems to me, that with each generation, social rules have become more relaxed. These topics are no longer taboo in society as celebrities, media, and even television programs and movies make them vulgar fodder for entertainment. Personal financial stability has become the buzz topic for 2009 as the economy sours and unemployment soars and I cannot turn on a TV or answer the telephone without being bombarded with messages instructing me on how to secure my personal wealth. In fact, I believe it will soon become the new “how’s the weather” conversation filler. So abundant is this topic, that I find my mind wandering to more pleasant ideas whenever it is brought up. Yet, even as I have become desensitized to the topic of financial security in general, I find it too difficult to discuss with my closest friends, even at the risk of losing their friendship altogether.

My husband and I have been trying to have a baby for four years. My gynecologist told me that it would most likely not be a possibility that we would be able to conceive, but still referred us for expensive fertility treatments. Having a baby was our only dream and the expense was not a deterrent. After two years of tests, injections, exams and painful procedures, our dream was finally realized; we were pregnant! Now that we were about to be a family, we knew that we could not continue our frivolous “single life” spending.

My husband and I were suddenly faced with a very serious decision: daycare versus staying at home. Daycare in our city costs nearly as much as our mortgage and would consume most of my salary. This made the decision simple. I had always wanted to be a stay-at-home mom and there was no way that I was going to work to make only enough to pay someone else to raise our little girl.

That being decided, the next hurdle was figuring out how we would be able to afford one less salary and one more mouth to feed. We attended seminars, wrote a budget, discussed consolidation methods and finally came up with a plan that would even help us pay down debt! By no means were we going to have money to go on European cruises every month or buy designer clothing, but there would be enough money for dates and incidentals. Relaxed, we were confident that we would enter parenthood completely prepared for whatever was thrown at us.

I have been out of work for nearly a year now. So far, knock on wood, we have survived hospital bills, doctor bills, and even those little extras for the baby (who knew that a baby would need so much stuff?), and even a struggling economy. What we hadn’t provided for was just how difficult it would be to raise a new baby.

There were many days that I would just call my husband at work crying. I’ve fed her, changed her, burped her and walked her, so why won’t she stop crying? These were the days where my husband stepped up and reminded me just why I love him so much. One such day, he had called my best friend, Lisa, and told her that I was having a bad day. She called me and told me that my husband was watching the baby tonight and we were going to a movie. When I arrived at the theater 15 minutes early (did I mention it was a really bad day?) I found that my chronically late friend had not only beaten me to the theater, but had purchased my ticket as well. I accepted the ticket a little self-consciously. I have never been one to accept hand-outs, but I figured this was just a gift and made a mental note to return the favor.

I had my chance to repay my debt a week later when I heard that she would be working from home, and so invited her to lunch. I, being naturally competitive, had my credit card out, primed and ready for action. I made sure to place my order last so that I could just whip out my credit card before Lisa could fumble with the clasp on her purse. Somehow, she managed to beat me and had her card in the cashier’s hand first. I told the cashier not to accept her card and to run mine instead. Lisa insisted. Rather than cause a scene in the busy restaurant and hold up the large line of impatient would-be diners, I acquiesced. Another mental note made, I accepted my lunch.

A few days later, another friend, Sarah, said that she had made plans with Lisa to go out for a girl’s night dinner at a new trendy restaurant and they wanted me there. By now, my daughter was teething and I was desperate to escape for just an hour. Well, maybe two hours. We had a fantastic time gossiping and laughing. I was just relaxing and feeling recharged when the bill arrived. Again, my best friend footed the bill- for all of us. I went home feeling a little deflated and beginning to feel as if this was more than a one-off thing.

Soon, the charity for which I volunteer was having a large indoor market fundraiser and I asked Lisa to go with me, primarily to just get out of the house rather than actually buy anything. A sweet little baby outfit caught my eye and, before I could say no, Lisa bought it for my daughter. I felt awkward and began looking for a graceful way to end the day and go home.

Next, Sarah and Lisa invited me to lunch. Getting together with my girlfriends is very important to me. It keeps me grounded in a way unlike any other. Yet, when the bill came, Sarah, this time, quickly paid the entire tab. Now I am certain that something is going on and have only told my husband how embarrassed I feel about it.

A week ago, we traveled out of town to visit with my husband’s family. My husband’s best friend, Clever Dude, lives about an hour away from our destination and he agreed to meet my husband, my husband’s mother and me for lunch and catch up. There was a lot of laughter and news and no one seemed in any great hurry to end lunch.

When the bill came, my husband paid the entire bill because, not only did Clever Dude travel all of that distance just to eat lunch with us, but we were already paying for 3 of the 4 lunches anyway, so why not? A few jokes about how Clever Dude should have ordered something more expensive brought the discussion around to my dilemma.

When Does Charity Go Too Far?

I explained how awkward I felt agreeing to do anything with my friends. Do I seem like I expect them to pay for me? Are they taking me out because they feel that I can’t afford it on my own? These insecurities bring me to other questions: when is it too much? When is it no longer a gift and more like charity? Am I paranoid for feeling so awkward? How do I tell my two friends that their kindness makes me feel uncomfortable and inadequate? How do I even bring up the fact that my husband and I are not just OK, but actually reducing our debt as well?

While I work out these issues, I’ve been avoiding my friends. Lisa got a promo for a spa where, if she brings a friend, then both treatments are 25% off. I am reluctant to confirm any time with her because now I am very afraid that she will buy the entire package ahead of time. Instead of spending quality time with my best friend relaxing, I find myself stalling until the deal ends. Also, I’ve avoided movies that I want to see and, before you suggest I bring my husband, could you see him at “He’s Just Not That Into You?” Exactly. I need my girlfriends.

I miss my friends. I miss the camaraderie, the gossip, the complete relaxation that I used to get from a few hours in their company. I always thought that I could talk about anything with them. We have certainly discussed religion, politics and especially sex (I did mention we gossip, right?) so why is money the one elusive topic? How did it become the white elephant in the room when we do go out? I need to figure this out quickly. February always heralds fabulous chick flicks and I am running out of space to keep mental tabs of all of my debts.