I got a motorcycle!

Yeah, I thought that would catch your attention. Actually, I picked up a motorcycle for another personal finance blogger from Philadelphia and brought it down to Virginia. I won’t name the blogger, as I want him/her to announce that he/she has gotten a new motorcycle if they wish. But things worked out perfectly. Here’s a picture of the motorcycle: 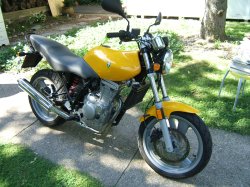 What’s great is I actually got to use my Honda Ridgeline truck to haul something! It was a win-win for both parties, as I used the opportunity to take my wife to see her best friend in north Philadelphia, and then helped a stressed-out blogger find a way to bring an unregistered motorcycle 150 miles back to Virginia.

I charged the federal rate of 48.5 cents per mile, which was far less than what a professional dealer would have charged. It helped reimburse gas, tolls and food for the trip. Luckily, gas was about 20 cents cheaper in Delaware and north Philly than in DC (parts of it anyway), so it helped offset the 17 mpg I got during the trip. I think we would have gotten better mileage if I wasn’t going so darn fast though.

Anyway, we got the bike loaded up in my Ridgeline very easily, and the guy who was holding onto the bike was very knowledgeable in lashing down motorcycles. The Ridgeline already had ruts for the bike wheels and 6 tie-downs built-in to the bed. The back wheel fit snuggly on the open tailgate, and the bike only moved while we drove more slowly and hit potholes. The wind held it in place at highway speeds. And to think Stacie and her friend didn’t think any motorcycle could fit in the Honda’s bed! PFFF! Here’s the pick, with the “bike guy” edited out to protect his identity: 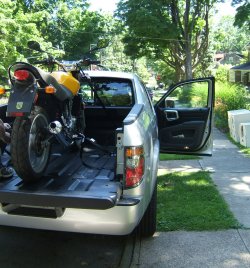 We almost couldn’t get out of Philly due to a major accident on I-76 (PA Turnpike) and then another major backup on 95 South. We doubled back twice and ended up going down Route 1 the whole way to Baltimore. We then picked up 95 South from Route 695.

All in all, I performed a deed that I originally thought would just be a good weekend road trip and chance for my wife to see her best friend, but it turned out, as I learned, to be very fortunate timing. The fellow blogger was having a hard time figuring out how to get the bike down in a cost-effective manner, as he/she was not licensed to ride the bike, and the bike was not registered in any state (i.e. no license plate). A dealer, I assume, would have charged around $500 to haul it down, but that’s based on the destination charge I see for regular passenger vehicles (and that’s shipping in bulk). Also, the guy holding onto the bike was in the process of packing to move to Texas and needed to get rid of the motorcycle.

So, I got to use my truck to haul something, got a trip for my wife to see her best friend, and helped a fellow blogger in dire need of assistance. Oh, and I got a few free books from the “bike holder” since he had to dump all the stuff not going to Texas. Get ready Frugal Gourmet, circa 1990 recipe book!