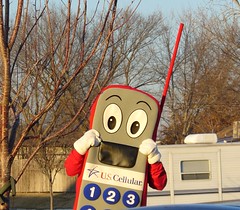 As we’re getting my wife’s home-based nutrition consulting business started, we’ve had to go through a few decisions about invoicing, faxing, home office, malpractice insurance and more. Now, before we can even think of printing out business cards for Stacie, we need a phone number for her business.

It would be easy to just say “Use the home phone or her personal cell phone”, but there’s a few problems with that:

So we had a decision to make: Get a new home landline or get a cellphone.

We first considered getting a landline (aka home phone) because, well, that’s what businesses do, right? I mean, if we’re going to run a business out of our home, then that’s where we should call from. But then the more logical side of my brain kicked in and started doing the math.

In our case, we already have a Verizon Family Share Plan with 2 phones. For my comparison, I just considered adding a third line to our share plan rather than getting a brand new contract. We have more than enough minutes per month, so I’m also not changing our plan (yet).

Here are the numbers:

Based on experience, the cheapest wired option for just local calls (no long distance) would be about $20-30 per month. This is the Economy Message Rate Service. We’ve had this before, and even though it’s priced at $5.92 per month, the reality is with all the fees and per-call charges (not per minute though), we’ll get dinged for much more than advertised (as we were years ago).

With the landline, we pay 10 cents per incoming or outgoing call, and voicemail is extra, hence the $20+ estimate. And this doesn’t count any “Installation Fee” either.

Since we already have a 2nd line on our family share plan, I know how much we’ll be charged per month for a 3rd line: $15. That includes voicemail, a share of 1000 minutes, and no long-distance charges (which is standard for cellphones today). The downside is that I have to buy another phone, but we’ll see about that…

So let’s see the main pros and cons of each option:

Those are just the bigger ones that pop out at me, but I didn’t want to get too detailed in my analysis as some of them are just personal preferences. Feel free to comment with your own, or rebuttals to mine.

Our Final Decision (and more details)

You can probably see which way I was leaning. We chose to just add another cellphone line. Here are some more reasons and details:

So the end result was only an additional $15 per month for a “business line” for Stacie, with full mobility and voicemail, which are the basics that she needs for her new startup. She doesn’t plan on working out of an office for this job, but even if she was, we would have gone for the cellphone anyway.

So if you’re starting your own home-based business, think about getting a cellphone instead of a landline, especially if you can add it to an existing account for a much lower monthly cost. Granted, standalone cellphone plans can be quite costly, but you also get nationwide calling, voicemail, 3-way calling, and mobility. To get the same from a Verizon landline, you’ll need to pay $55.99 plus fees and taxes, which would total at least $70 per month. And you can’t take calls outside of the office.

Anyone have other experiences or have had to make this same decision?