Got a small house? Need a new guest room? Buy a motor home or trailer! 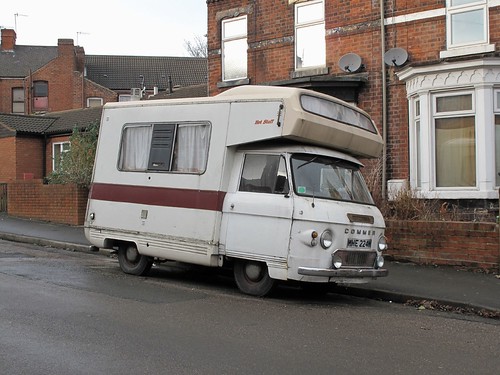 We live in an older community, where our home is 70 years old and those south are mostly 50-60 years old. Back in those days, they didn’t have the concept of McMansions, and most of the home are about 1000-1500 square feet.

So, I generally classify our community (including the largest collection of homes, not just the few streets around us) as either “starter homes”, “downsize homes” or “rental homes”. But on one of our walks recently, we passed a home we’ve passed many times, but something new struck me. You see, this home is average size for the neighborhood, has a garage, but also has a very large driveway. In that driveway is parked one of those “bus motorhomes” (i.e. they’re the same size as a bus). Plus it has a trailer hitched in the back. Kudos to the owner for being able to park the thing, but my focus here is on the following:

Why would someone own a mobile home as big as their house?

But then another thought came to mind (no, not talking about the jealousy one): For all these people with small homes, why not buy a motor home or trailer for the extra room?

I’m no expert on the hookups needed for electricity or water, or even zoning laws for your city, etc., so I’m mostly ignoring those technicalities here, but think about it. Instead of spending $40-100k or more on an addition just so you can get another bed for someone to sleep in once a year, buy a small camper. On the hot or cold days, it’s prepared in some way, whether running from its engine, a generator

or hooked into your outdoor outlet to heat or cool the interior. Your guests would basically have their own living space and wouldn’t need to “invade” your home!

And in the economy of the past few years, mobile homes (trailers and campers, not the single-wide type) have taken a pounding and dealers are begging buyers to take them off their hands. Even better, you can get a used one for even less. I have a truck and would just need a hitch and not only would I have that special addition already furnished that we’ve been wanting, but also our own vacation lodging when we want it!

I know I can’t be the first person to think of this. Let me know if you’ve done something similar (e.g. put up your in-laws in your camper for the week), or have an informed opinion on the matter. Remember, rules and laws change by neighborhood and municipality so what goes in rural Arkansas might not be allowed in downtown D.C.