Geico Accident Wrapup: In and out in 5 minutes

Last Wednesday, my wife got into a car accident, before the check even cleared for the last payment on the car (I posted the article early Thursday). The Malibu had minor damage, and the other driver, luckily, claimed full responsibility.

Rather than placing a claim with our own insurance company (Allstate) and having to pay the $500 deductible, we put in a claim that night with the other driver’s agency, Geico. Boy, did Geico move fast! Thursday morning, shortly after the article went live, I got a call from the Geico adjuster to set up the appointment and rental car for the next day (Friday). It turns out that Geico, Cherner Collision and Enterprise Rent-a-Car are all in the same location (same lobby even!), just 4 miles from our home.

Friday morning, I walked in at 7:40am (10 minutes early). I waited about 2 minutes for a Cherner rep, then walked out to see the car. They took some notes, we walked back in, and they entered it into the system. They mentioned there was a good chance the car would be done by that same day, or at the latest on Monday (today).

I then walked 3 steps over to the Enterprise counter, who already had my reservation ready. They ran out to get the car, and while I waited, they printed out the paperwork. I always rent through Enterprise, so I knew the process (decline extra insurance). They pull up the car, which was a 2007 (?) Hyundai Sonata V6, with a sunroof. We walked around the car, noted a few blemishes, signed off and I drove away. I dropped off the car at home and walked to the metro since it was so nice out. 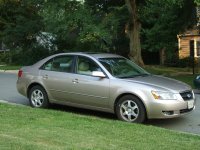 I won’t bore you too much with car details, but I was pretty impressed with the Hyundai Sonata. I’m used to driving a 4 cylinder car (I don’t count my V6 truck since driving a truck isn’t like driving a car), so the 90 or so more horsepower in the Sonata than in the Malibu was a nice change. However, I remembered one of the reasons I traded in my 2002 Acura TL-S (260 HP). It has too much darn power, and I have a lead foot.

Overall, the car was nice. I think it’s definitely better than most domestic mid-size cars in style, design and options, but I did notice the engine chugged rather than purred, and some of the dash components looked a bit cheap (like the plastic over the radio and clock displays). Also, the front tires squealed ALL THE TIME, even when I tried NOT to “get tire”. I’ll blame most of that on the tires (didn’t catch the brand), rather than the car or the driver (me). Also, the car had 30,000 miles, which was surprising for a rental, so maybe the tires were too worn.

Finishing up my story, I got called at 5:10pm on Friday that the Malibu was done. Whoah, that was fast. However, the center closes at 5:30pm, and I was walking home from the metro. There was no way I could make it in time. They said it was fine and keep the rental till Monday.

This morning, I left the house at 6:50am. I stopped at the dry cleaners across the street, then headed up to return the car and pick up our Malibu. I arrived at 7:10am. I went in, checked in to pick up the Malibu. While they were doing some paperwork, I stepped over to Enterprise and checked in the Sonata. They left to check out the car (gas level and any damage). While they were checking, the Cherner rep finished up my paperwork, and I signed off on the $427 repair (paid by Geico of course).

The only issue I had was that Geico initially rejected the extra day of rental car coverage, since the repair shop was technically done on Friday. Enterprise told me they would call if they couldn’t get Geico to pay. I called an hour later from work to check in on the progress, and the rep said Geico hasn’t responded yet, but that if Geico didn’t pay, that Enterprise would just back-date the rental one day so I wouldn’t have to pay anything. Thanks Enterprise!

I’m considering switching to Geico, but I’ve really heard conflicting stories about their quality of service. I’ll refrain from applying until an accident from 2005 is removed from our record next year though.