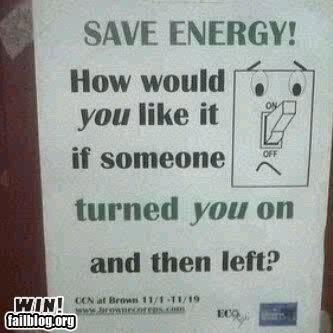 I work in a cube farm and we each have 2-3 fluorescent desk lights under our shelving. Most of us don’t use the extra lighting, but a few others like the extra light, especially if they do quite a bit of paper work (instead of computer work).

However, I have a certain coworker near my cube who insists on leaving her desk lights on and gets mad if anyone turns them off overnight or over a long holiday. She tries to justify it by saying “my plants need the light”, but I’m sorry to say, the plants aren’t getting very much from this extra light compared to the amount of energy they’re using by being on so long, plus the damage to the environment when it’s time to trash the old bulbs when they die.

What else does this coworker do? She doesn’t give a crap about recycling. There’s a mixed recycling bin about 10 steps from her cube that accepts paper, plastic, and cans, but she tosses everything into her own can, which, of course, goes straight to the dump, not to the recycler.

So every so often, I turn off her lights, especially on Fridays and holidays, but I always hear her complain when she gets in, like it’s some horrendous event for her to turn on 3 switches. I hear her complaining about “someone keeps turning my lights off! Who would do such a thing???”.

So this past Monday, I turned off her lights when she left, then on Tuesday she came in and complained as usual. I had my boss in my cube, so I called over that I turned them off because the university has a guideline to turn their lights off. She replied back, not knowing that our director was there, that “Bob (name changed) said she could keep them on for her plants”. My boss replied back that 1) Bob doesn’t work here anymore, 2) Bob didn’t pay the electric bills and 3) it’s university policy to turn off your desk lights when you leave.

She didn’t reply back.

And just then, we all got an email from the university listserv reminding us to conserve energy by a number of ways, number one of which was to turn off your desk lights. SCORE!

No, she won’t change. Why? In my opinion, she’s selfish and inconsiderate of others. There’s many other incidents that lead me to this conclusion that won’t fit in this post and probably shouldn’t be written anyway, but this coworker is just the type that cares only about herself. She thinks people are out to get her, that people are constantly stealing things from her desk…wait, is this Office Space?

So what am I getting at? First, I wanted to complain anonymously about this coworker just to get it off my chest, but after a conversation with my wife tonight, we wonder if we’re in the vast minority. The minority being people who aren’t “Green Peacers”, but care about the environment. While we waste in some parts of our lives, we also go a little out of our ways to recycle or generally avoid waste in others.

For instance, my wife goes through her office floor, turning off lights before she leaves. She also combines her trash can with the bigger, more used can so the cleaning people don’t waste a bag. She used a reusable mug rather than the paper cups in the kitchen. She uses water she doesn’t finish to water the office plants instead of just dumping it out (as do I).

I didn’t grow up with a conscience about protecting the environment; rather, I think it’s the efficiency aspect I enjoy. I like to see ways I can save money or materials while still getting the job done, and that’s a trait I’ve adopted over the years.

An example of my non-frugal youth is when I was in my early teens, our town instituted the blue can recycling (where you had to separate everything, bag up paper, etc.). Back then, we hated changing our patterns and getting another can in the kitchen for recyclables, then going through “garbage” to separate them in the blue can.  I think my family still doesn’t really practice recycling much, but they don’t have the luxury of single-stream recycling (where you don’t need to separate stuff). Let’s see if this article sparks them to change 🙂

Another thing we do is compost food.  We have a Soilsaver Compost Bin from Sam’s Club for about $40 (I’d link to Amazon, but they cost double) out in the yard. The hard part for most people, though, is what to do in the kitchen with the food waste. We have an old Country Crock container as a holding place for the food and we keep it in the fridge. When it’s full, we walk it out to the bin and dump it and start over. Not that hard, now is it? And this year, we got a wheelbarrow-full of nice black soil out of the bin from a year of composting yard and kitchen waste, which we used for our tomato plants (our first garden actually).

What do you do in the office, or at home or at school? Do you just dump your bottle or paper in the trash, or do you search out a recycling bin? Do you take your recyclables home if your workplace doesn’t recycle or is that too bothersome? Do you recycle and conserve out of concern for the planet’s future, or out of efficiency?