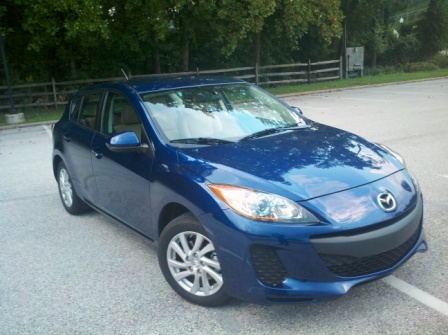 Disclaimer: Mazda provided me with a 2012 Mazda3i for a week to review and treat “as I would treat my regular vehicle”. They paid for insurance and the first tank of gas. They did not pay me in any way, nor did they guide me on how to write my review.

So, Mazda has put me in a tough spot with this review. Why? Because the car they gave me, a 2012 Mazda3i 5-Door Touring (hatch) with SkyActiv technology (yes, a long name and no E on the SkyActiv), is just $120 less than the 2012 Kia Rio SX (4-Door sedan) that I recently reviewed. It may seem odd to compare two cars from different size classes in an auto review, but since their prices are so close together, and this is a blog mostly about finances, I canâ€™t help but to compare the two.

First, what did the Mazda have vs the Kia? Let me highlight, to me, the biggest feature differences, and keep in mind the mere $120 difference (take out the $95 floormats in the Kia, and youâ€™re $25 off):

I will note, however, that both vehicles had Sirius satellite radio, voice-activated controls and bluetooth connectivity. In both cars, the voice-activated controls were nearly worthless, but could be better, perhaps, if you learn the key words to use. Regarding the bluetooth, the Kia was extremely simple to set up, and I was able to stream Pandora from my Droid in both cars. But while the Kia was able to easily download your phone’s contacts, the Mazda required you to create each new contact in its own phonebook. This is inexcusable because most people, myself included, will just pick up their phone, search for the contact (or use the phone’s voice control), dial and let the car’s audio take over. C’mon, we’re in the 20-teens and it’s time to keep up with the competition from last decade.

I am glad, however, that Mazda did get rid of the red interior lighting and switched over to blue (or was that the expensive “lighting package”?). Screens were readable, except in bright daylight, similar to the Kia, but I didn’t understand the odd little screen used to show the radio station you were on. As you can see in the photo, it uses big letters on 2 levels, but what you can’t see is that nothing scrolls and the screen on the left is simply easier to use and read. Why couldn’t they either make the left screen bigger or make both look the same but for different purposes? 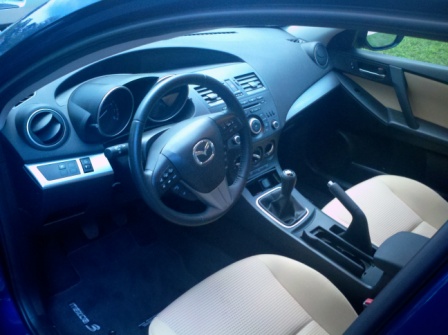 Above: Interior of the Mazda3i. I like mostly everything except the tan seats (I always prefer darker seats due to staining) and the stupid second LED screen (below): 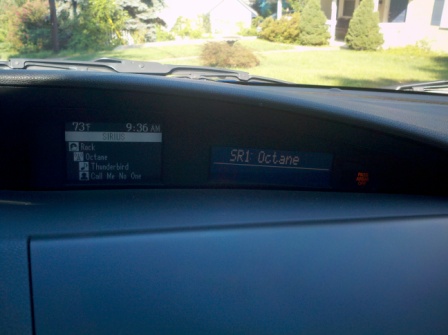 Take note that if I were to have the 4-door sedan model of the Mazda3, the interior size difference isnâ€™t that drastic. The width and height (thus shoulder and hip room) are just 1.5-2â€ in difference, but the length is the biggest difference with the Mazda 4-door being about 5 inches longer than the Kia Rio. You would think, then, that all that space would mean more leg room in the front, rear and extra space in the trunk, but in reality, when looking at the spec sheets of both vehicles, while the Mazda (supposedly) has much more rear leg room and passenger volume (5.5cubic ft. more), the Kia comes out on top with cargo volume (2 cubic ft more).

But looking at the spec sheet comparison between the 5-door Mazda3 and 4-door Kia Rio,both cars have the exact same front and rear leg room. I knew it! In fact, to get comfortable driving a manual transmission, I had to put the driver seat back further than in the Kia, so whoever might sit behind me loses out thanks to the third pedal.

And when you look at total passenger volume, the Mazda3 drops down to just 3cu.ft. more than the Kia, but it blew the Kia out of the water with total cargo volume with +5.5 more (whereas the Kia had more than the 4-door Mazda3). So Mazda ended up sacrificing rear passenger comfort for more cargo volume, and it showed when I tried out the back seat. But honestly, I would still much rather have a hatch than a sedan for many vehicles due to styling and functionality, and I don’t sit in the back seat of my own car. But I did use the hatch with one seat down to transport a large pool solar cover with no problem (see below): 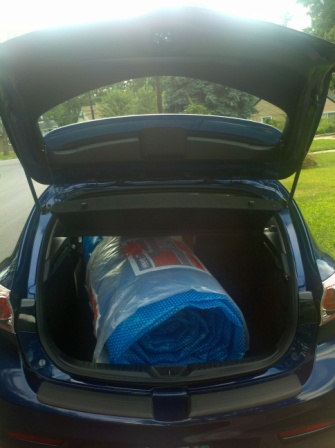 Above: The super-large pool cover with only one seat down

Below: Seeing how far it intruded into the rear passenger space. 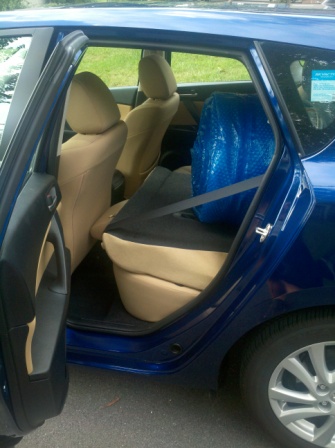 Since weâ€™re on the topic of the rear seat, letâ€™s take a look at a recent article from another site regarding â€œCar Backseats to Avoidâ€. Who makes it on the list? The Mazda3.

Mazda claims 36.2 inches of rear legroom, but the numbers mislead. The Mazda3’s backseat is tighter than sedan rivals like the Kia Forte, Volkswagen Jetta, Honda Civic and Dodge Dart. Adults will find legroom and footwell space tight. Many compacts have reasonable backseats, but Mazda doesn’t make one of them. It’s an affordable car, at least, so the driver might be open to cheap bribery to give you front-seat rights.

I had my driverâ€™s seat in a position to be comfortable, and when I sat behind the driverâ€™s seat, my knees slightly pushed into the back of the seat. Thatâ€™s a big difference from the inch or more of space I had in the Kia. Keep in mind, though, that the design of the car and whether the seats are positioned upright or lower down determines where your knees end up and thus how comfortable you are. The leather cushions in the back seat of the Kia were nice and plush, while the cloth seats in the Mazda were a bit more firm. But it depends on your own height and width whether you would be comfortable. And if you have a rear-facing baby seat, there is (supposedly) more room in the Mazda.

Granted, as I mentioned above, the hatch has less rear legroom than the sedan, but you gain cargo volume (i.e. carrying stuff), so which is more important to you? Rear seat space (also important for baby/kid seats) or more hauling room behind the back seat?

Now for the driver’s comfort. For a manual transmission, I expect one thing: the center armrest needs to be both comfortable and positioned just right for my arm to line up with the shifter. The Mazda did well enough on the latter as long as I jacked up the driver’s seat (which I had to do in the Kia too), but it failed miserably on comfort. It didn’t take long for my elbow and then my arm to become numb, especially on a 90-mile drive to a friend’s place in PA. I knew after just driving for 20 minutes that I absolutely couldn’t drive this car longer than 2 hours without a good 1-2 hour break.

My wife, with her tiny body, said her seat was more comfy than the Kia’s because it hugged her more. However, the extra “sports bolstering” for me meant less flat space for my butt and back (aka “a skinny seat”). It wasn’t made for someone my width. I think overall that the armrest, lack of lumbar support and small seats killed the idea of wanting to own this vehicle for myself, as opposed to the all-around comfort (minus lumbar) of the Kia’s cushy, leather seats.

But you may ask “You keep slamming the Mazda, so where does it shine?”. Well, I felt more confident on the road, once I became comfortable with the manual shifting, than in the Kia, but not by much. If I were to give the Kia 3 stars for driveability, I would give the Mazda3i with SkyActiv a 3.25.

The fun factor of driving a 6-speed stick shift wore off quickly when I realized the car just wasn’t geared or powered for fun, but rather for economy. While the Kia, with an auto transmission and 6 gears, has less overall power, the auto transmission downshifted when I wanted it to, even if it meant dropping down 2 gears. In the Mazda, it didn’t always like me going from 5th to 3rd, and sometimes wouldn’t let me into the gear until my speed came down. When you need to pass and you drop out of a gear, you expect to get into the gear you want and MOVE! Again, perhaps a learning curve with a manual since it’s been a while since I drove one full-time.

Just to throw in some numbers, after driving about 385 miles in the Mazda, I averaged 32.6mpg. That was better than in the Kia, but 200 miles more and many more highway miles, but I didn’t pansy-foot it on the highway because I decided to drive the way I normally would. It was a very subjective test, so I can’t easily compare the fuel economy on both cars, but the Mazda ended up better than its EPA average than the Kia did. 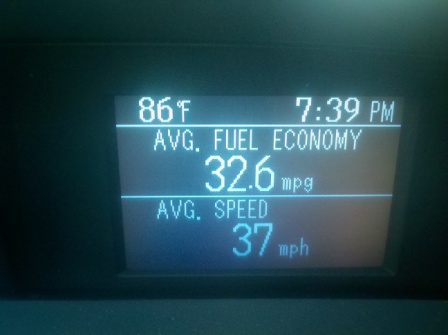 But what is the point of the manual transmission on this Mazda3i? First, the auto transmission gets 1mpg better in both city and highway. Second, it’s safer even if you’re an experienced shifter because you are less distracted. And third, historically you would get a manual for one of 3 reasons: 1) fuel economy (not a benefit here) 2) fun/more control when racing (you don’t race a SkyActiv Mazda3) and 3) Cost.

The automatic costs $850 more than the manual transmission. You’ll need to either drive A LOT of miles to break even, or gas has to become extremely expensive, or both.  So if you’re ok being distracted, getting lower fuel economy and not really adding much sport to your car, then go with the manual, but I would recommend spending the extra in this case and go for the automatic. It doesn’t make financial sense, but over the course of owning a car for 5-10 years, I would get completely sick of driving this manual car, regardless of how smooth it shifts. Give me a Miata (MX-5) with a slush box any day because it meets all 3 of my requirements stated above, even if i look like I’m driving a clown car. 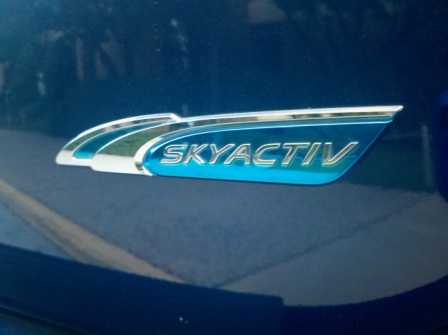 So, in the end, when I’m shopping for a car with good gas mileage, great warranty, good to drive and very well-equipped, I would choose the 2012 Kia Rio SX over the 2012 Mazda3i SkyActiv any day…unless I really needed that little bit of extra room. But even then, to get $thousands more in features for the same price, with better mpg and more comfort, it’s hard to beat the Kia. And I have a feeling that’s how many automakers would stack up to the Korean competition these days. The Mazda was nice, but the Kia was MUCH nicer with more features, better warranty, more MPG and more comfort for just $120 more. If I were to test the Mazda against its true competition (Civic, Corolla, etc.), then things might change, but I’m going by price, and Mazda just didn’t deliver against a smaller, more expensive car (even if that sounds completely backwards for a personal finance site like mine).