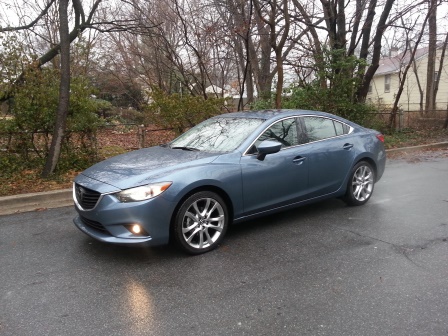 First, I just have to say that the new Mazda Mazda6 sedan is one sexy animal, both on the inside and especially the outside. It’s a different kind of sexy than the Kia Optima I tested some time ago, but I love the styling and how they’re already integrating it throughout their line (see the CX-5 and Mazda3 as examples). But beauty is in the line of the beholder, so I won’t wax on any more about it until I get to the interior.

My model was the top-of-the-line Mazda6 i Grand Touring in Blue Reflex exterior and black leather interior. Base price for the Mazda6 in general is close to $21k, and this model starts at just shy of $30k. With a few trim options and one big safety and technology equipment package, the final tally, including destination, is $32,845.

The mid-size sedan market is VERY competitive, and many seem to see the Mazda brand as an “also ran”. However, if you don’t at least take the car for a spin when you’re out checking your Accords and Camrys, then you’re doing yourself a major disservice. One big reason is the drive, but I’ll get to that later. The first one to discuss is the options and packaging…and how well they work. 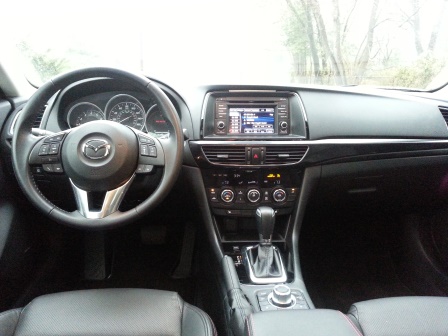 For the Grant Touring trim, you get tons of standard equipment. For me, it was easier to just copy and paste from Mazda’s website. There are 3 trim levels: Sport, Touring and Grand Touring. For comparison’s sake, I’ll list the Touring specs since they contain some items also in the GT.

In addition to Touring features:

Just reading through the standard features, you can see this car is loaded with the latest in tech and safety features. And in addition, with the GT Technology Package, you add:

I’m, it’s a four-banger engine with less than 200 for both horsepower and torque, but here’s the reason it’s better than the competition: ITS A BLAST TO DRIVE!! No, seriously, Mazda makes economical cars that generally across the board are MUCH more fun to toss around than their competition, whether it be compact, mid size, CUV, or even a mini-minivan. 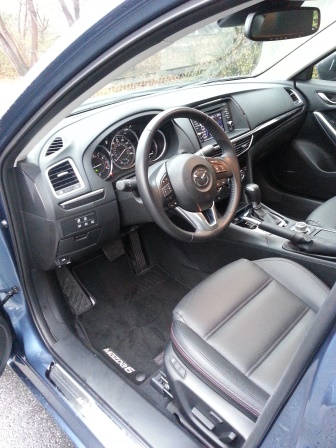 The biggest plus is the steering. It’s almost as tight and responsive as a MINI Cooper (which we own), and the paddle controls behind it make me actually want to use the semi-manual shifting option, which I abhor on anything other than a true performance car. Ok, so the car doesn’t have much more power than a much smaller MINI Cooper (less than the Cooper S actually), but there’s a saying in the car world:

And they’re right. How much fun is it to drive a 500 hp Mustang through city traffic versus driving a Mazda MX-5 (Miata) around and autocross course or a coastal highway? I’d always choose the latter. And that sums up the drive for the Mazda6. You don’t even think about the power numbers when you’re out on the road because it’s powered, geared and engineered to do what 95% or more of owners will ever want or need out of their sedan.

The seats were comfortable and, for once, my wife didn’t complain about not having a good view out of the front (which I found odd as the dash seemed just as high and the seat just as low as other sedans she’s tried). Overall, this would be a great around-town or highway hauler car. 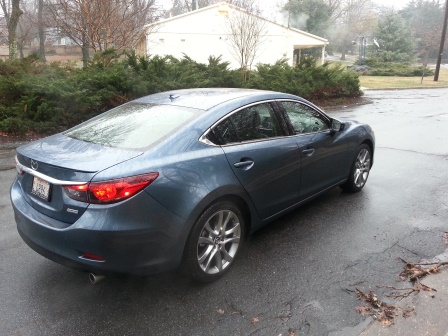 Here comes the part where I add my criticisms of the car. I can’t find much fault with the exterior, but the interior and some of the technology provides some disappointments and general annoyances. While my wife and I initially loved the shiny, modern design, as the week went on, I noticed the wide variety of textures and shades of black/gray across the various plastics. And I noted most of all that the overall center console layout was not very driver-friendly, ergonomic nor intuitive.

There were buttons all over the steering wheel, and the they added redundant dashboard buttons AND then they added a knob and buttons where I think I would have rather just had cupholders. And then add to all that redundant menus and touchscreen controls on the nav screen and you’re just confused all over. Some menus could only be accessed via the steering wheel controls, some via the screen, but I think all in all that Mazda needs to have a more cohesive, unified and intuitive design inside. For example, there are 2 “back” buttons on the console by the knobby controller. One takes you “Home” while the other goes back one screen. Why doesn’t the Home button have a Home icon? 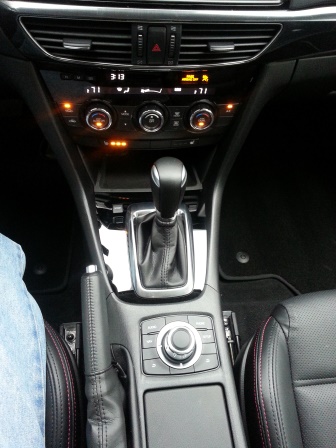 The media options were great, whether iPod, Bluetooth (android), XM radio, etc., we didn’t lack for distractions. However, the voice-activated TomTom nav system was both a bit small and not much better than just using my phone nav, but I think you’ll find this becoming more common with every car review until car makers add more device integration for navigation. For example, I tried numerous times to ask for navigation to “Clay Oven”, which is within 30 miles of our home, but I can only laugh at the suggestions it gave. But when we asked for “Olive Garden” or “Home Depot”, it found them on the first try, sometimes with multiple options. So it was disappointing that it seemed to not be fully preloaded with more points of interest.

Some of the other features were very welcome and even surprising. For example, while driving at night and making a turn onto our street, I noticed the headlights moved. I looked at the spec sheet and saw the “Adaptive Front Lighting System”, which must be this feature. Basically, the headlights turn when you turn (but only when moving, not stopped) to help light up corners better. I also liked that it had memory seats (I miss those from my old Acura) and finally lumbar support in a test vehicle! And the safety tech! While on the highway on a 60 mile roundtrip drive, I put the adaptive radar cruise control on 65 and got in the right lane. I set the distance control to “medium” (meaning how far away it will keep pace with the vehicle in front) and let it go. I didn’t even notice that it dropped down to 55 as I was following a slowpoke (speed limit was 65). I move to the left lane and it accelerated back to 65. I LOVE THIS FEATURE, mostly because it actually works! I (luckily) didn’t get to test the rear cross traffic alert, but the lane departure (while annoying) and blind spot (necessary due to poor side/rear visibility) are well worth it.

Lastly, fuel economy. As you can see below, while the car should average in the 30s (28 city/40 hwy, 32 average), I, and other reviewers, tended to get much less. Perhaps it’s our “spirited driving”, extra cold weather or perhaps the whole SkyActiv design (which is more than just an efficient engine) needs tweaked. Either way, I average 24mpg, and I had to tack on a good bit of slow highway driving to get it up that high. In comparison, I just had a full-size 2014 Chevy Impala with a big V6 engine and also averaged 24mpg. Granted, I did a LOT more highway driving, in warm Florida weather and at reasonable speeds (cops are everywhere down there!), so it’s probably not a fair comparison. Basically, your mileage will vary.

With the average selling price of a new car these days right around $32,000, this fully loaded Mazda Mazda6 i Grand Touring is definitely competitive on price and features. You also can add head-turning looks, a sporty yet comfortable ride, numerous safety controls (that work) and infotainment options galore. Once you figure out the best ways to access the controls, you have yourself an amazing car. And keep your lead foot a bit lighter and I’m sure you can do much better than me with your gas mileage.

If you’re in the market for a mid size sedan, please, please, PLEASE give the 6 a test drive. Don’t get into a vanilla Honda or Toyota and wish you could be in one of those sexy Mazdas a few months from now. 😉

Mazda USA loaned me a Mazda for a week, paid for fuel and insurance, but in no way influenced my opinion or style of writing for this review.