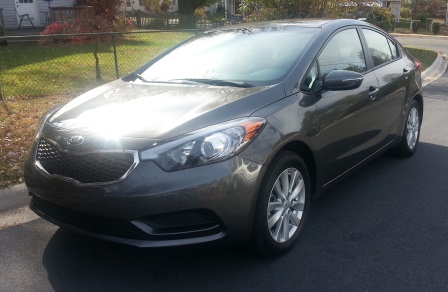 Disclaimer: Kia provided me with a 2014 Kia Forte LX for a week to review and treat â€œas I would treat my regular vehicleâ€. They paid for insurance and the first tank of gas. They did not pay me in any way, nor did they guide me on how to write my review.

I wonder how many of you will say “What is the Kia Forte?”. Interestingly, the Forte has been out since their 2009 model, and this is now their second generation of the Forte. The original Forte was a solid car, but up against tough competition with the Honda Civic, Toyota Corolla and its platform-mate, the Hyundai Elantra (ah, you’ve heard of that one, huh?).

But, to me at least, Kia has been taking the market by storm with its sharp looking, well-designed cars, excellent warranty and quality products, both inside and out. I’ve reviewed a number of Kias, including the smaller sub-compact Kia Rio last year, and I’ve been consistently impressed with their offerings. Compared to their American and Japanese rivals, Kia includes more features (that we want) for less than the competition, and still gives us good to great styling on the outside and inside. Sure, there are hard plastics, but they at least blend together so you don’t get a mish-mash of patterns, shades and textures throughout the cabin. 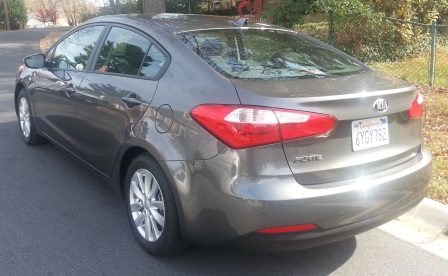 Accolades for the 2014 Kia Forte

Normally I would just start into my own review of a vehicle, but since I’ve seen/read a few publications’ awards recently, I wanted to highlight some accolades the Forte has received from the automotive press, and then launch into my own opinionated review 🙂

Right before receiving my Kia Forte loaner, I watched the Motorweek challenge, held here in Maryland. The challengers were the Forte, Civic, Elantra, Subaru Impreza, Nissan Sentra, Corolla and Ford Focus, and the Cars.com Editor-in-Cheif said “the Forte truly stood out against the competition. Between its dynamic exterior styling, impressive standard features for the price and excellent ride and handling, the 2014 Forte is a well-rounded car that checks off all the boxes of the perfect, affordable compact sedan.” Also, “the Forte is designed to bring our customers premium amenities at an affordable price,” said Michael Sprague, executive VP of Marketing and Communications of Kia Motors America.

Now, during the aired broadcast on Motorweek, they didn’t have a license plate on the Kia, but I couldn’t help notice that our car was the exact same model and color as the one reviewed. I’d like to think that I sat in the same car, and thus got a chance to review the same exact machine these other testers awarded. But that’s just my guess, not fact.

MotorTrend Finalist for 2014 Car of the Year

While it didn’t win Car of the Year, the 2014 Kia Forte was one of the few finalists for MotorTrend’s annual Car of the Year contest. And not surprisingly, the same issues I had with the Forte were the main reasons it didn’t win Car of the Year, but read on to find out those reasons. But I will say it beat out other competitors such as the Acura RLX, Infinit Q50, Kia Cadenza (hope to review this someday too), Lexus IS, Lincoln MKZ, Mercedes-Benz CLA and E classes, BMW 5 series (i.e. the M5), the Porsche Cayman (which I would love to own one day) and the SRT Viper. But please note that it wasn’t in direct competition with those other cars. Each car is evaluated against 6 criteria and specifically against the performance of its intended function. So, a compact economy car is rated against the standards of compact economy cars, while a sports car goes against sports cars, etc.

I will say that my 7 days with the Forte were pretty uneventful. Some cars I get to put a few hundred miles on, while others only get a few dozen. With the Forte, I only put on about 60 due to, well, the lack of anywhere to go that week. But I did get a good sense of how it handles around town (true city driving) and on the highway.

In addition to these standard LX features, my car was fitted with the “Popular Package” which added:

I’m surprised, though, that most of the items on that $900 list aren’t also already standard. Things like cruise control, remote keyless entry, map lights and armrest should just be standard in any car, so I’m not sure what is worth $900 there.

If you wanted to fully max out the options list and go with the EX, with a more powerful engine, better infotainment screen/system, optional sunroof, chrome accents, optional HID headlights, optional Nav, optional leather seating (w/optional heating and cooling), and just a buttload more features, you’ll be spending closer to $25,400 w/destination. But you do get many features not even offered in the competition (heated steering wheel and heated rear seats, thank you). 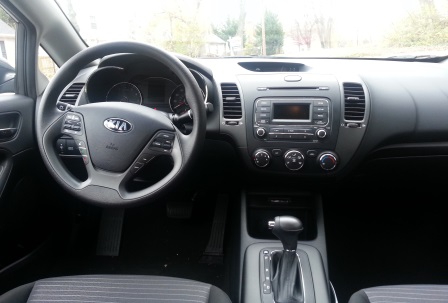 I don’t have much to say about the drive other than I was surprised by the extremely quiet cabin and solid feel over any bump. The engine was slightly buzzy at times, but I felt very insulated from most outside noise, and the car didn’t jump or jitter over potholes or road imperfections. Amazing with a compact-sized car! I did notice the day before I gave it back, though, that there was a bit of a rattle coming from the passenger side, but I didn’t get a chance to diagnose it. It could have just been the seatbelt not properly stowed, but otherwise, there were no squeaks or rattles on this 3500 or so mile car.

One ergonomics complaint I had, before getting to the bad news, is that the car only comes with driver window auto-down as standard. I fully expected Kia to have auto-up as well, and I noticed it when pulling away from a bank drive-thru. C’mon, it’s not that much harder to program in auto-up, and you even offer it on your EX trim!

Now for the two pieces of bad news:

1) The steering sucks. I’ve noticed this with ALL Kias, and so did MotorTrend. While the steering was nice and light in parking lots, out on the road, it kept switching between light and heavy, so you didn’t know how it would react when you turned or just adjusted your tracking. It’s by far the biggest (driver’s) detriment to the Forte that could push some buyers away, but I may just be picky after owning a MINI Cooper (which has very tight steering).

2) Poor passenger crash test. Motor Trend also cited the NHTSA’s 2-star rating for the passenger crash test (front driver got 5 stars), while the competition generally gets 4 stars here. While the Kia provides many airbags and other safety features, the low rating does give pause to considering it as your daily driver. It’s odd as the Kia Rio and Hyundai Elantra both get 4 stars, so how did Kia go so wrong on their engineering of the Forte?

I can’t talk about compact cars without talking about my fuel economy. Over about 57.7 miles of mixed driving (mostly city), I average 23.7 mpg, as shown in the photo above. Doesn’t sound too great for a compact car, does it? I wasn’t overly lead-footed, but I did drive probably 90% stoplight-to-stoplight. When I was on the highway, the average quickly climbed up past 30mpg, but my city driving brought it down dramatically, as you can see. I’ll just say that your mileage WILL vary, and if you use the car mostly on the highway, you’ll see well over 30mpg averages.

I know I already said that the Forte was an exceptional value, given the styling, features, options and competition, but one thing that hasn’t been discussed in those other publications is “Do you really need a compact car?” Hear me out on this one:

Back when I tested the 2012 Kia Rio SX, which, for 2013, is a fully-loaded sub-compact for just shy of $21,000 (w/destination), I praised its value and wasn’t even aware that it was classified as sub-compact. I compared it to the Mazda3 which is a size bigger, but never noticed the lack of room between the two. And that got me thinking: What is your main need in a car? If you needed something economical, well-featured, stylish and safe, yet well-priced, but didn’t need the extra space, wouldn’t you consider the Kia Rio SX for $4500 less than the maxed-out Forte? Sure, the Forte has features you can’t even get with the Rio, but the question then becomes “do you need them”?

You could get navigation w/traffic and rear camera, sunroof, heated leather seats and push button start with smart key (where you don’t need to take the key out of your pocket), and honestly you wouldn’t be losing much in space. Here are some notable stats from Kia’s website:

Now I know I’ll get some flack for comparing two cars in different classes again, but I wanted to put out there to my readers that if you don’t need the rear passenger space, that in reality, you get almost the same front passenger space and cargo room, and lower weight and better fuel economy in the Rio than the Forte (and almost the same styling). But if you need that 2nd row for child seats or anyone bigger than a kid, you’ll want to steer towards the Forte. Again, the Forte also has standard and optional features not present on the Rio, so investigate what options you want and need before making your decision.

I have almost nothing but praise for what Kia is serving up for its customers, both in style and substance at a great value. They were the laughing stock of the automotive world just a few years ago, but so was Hyundai before that, and Toyota/Honda well before that. Some manufacturers take the ridicule as constructive feedback and continually make improvements, while others whimper and run away. Kia has taken the high road and consistently improves year after year and redesign after redesign. They’re here to stay and the Japanese AND American heavyweights aren’t just looking over their shoulder anymore; they’re running to catch up to Kia!