Calculate Financial AND Opportunity Costs of Your Decision

Today, let’s talk about opportunity costs. It’s a term you often hear in the business world in relation “the cost of an alternative that must be forgone in order to pursue a different action“. But it most certaintly relates to your personal finances as well. Can you think of some? I can. For example:

The MINI Cooper and Opportunity Cost 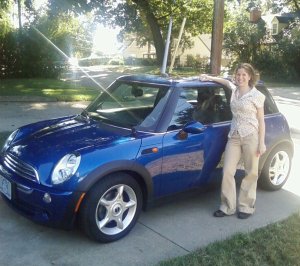 You’ve read recently that we bought Stacie a new MINI Cooper. That’s a lump sum of about $13,000 plus another $6,000 at 0% on a credit card. It will all be paid off by December or January (the larger amount probably next week), but let’s look at this purchase in a different light. A number of commenters have lambasted the decision because they saw it as a frivolous waste of money when we could have gotten a much cheaper car (or no car at all). I accept your reasoning.

The list can go on and on, but this is the short list that we considered after selling our Malibu and pocketing almost $12,000. So, why didn’t we go on that trip to Ireland? Why didn’t we invest it towards our retirement? Why didn’t we install hardwood floors and increase our home’s value? The answer is:

Stacie has wanted a MINI Cooper for over 4 years.

Let me explain. I’m not a math lover, so in my purchases I don’t always bother with running the hard numbers to come to a sound decision. Why? Because numbers only explain part of a purchase. The rest is emotion and logic (math is part of the logical thinking). Opportunity cost is also more than just calculating numbers.

We’re really considering whether we can afford a trip to Ireland this January when I have a break from school, but I doubt we’ll go. We don’t have the money, although we could save it up fairly quickly. However, it would put a big dent in our debt repayment plans. But couldn’t we have used part of that $12,000 from the Chevy sale towards the trip? Yes. Well why didn’t we?

Because a 10-day trip to Ireland would give us memories for a lifetime, but we’ve already been to Ireland (for our honeymoon). It was time for Stacie to finally own and drive a car that she would love.

We’ve forgone a number of other opportunities in order to get the MINI. Had we spent $4000-5000 on a trip to Ireland, we couldn’t have afforded a new(to us) car. The trip to Ireland would have given us a lot of memories, but the MINI can take us to those memories, although we’d have to drive really fast to skim across the Atlantic Ocean to Ireland! Both would make my wife smile, but the MINI also provides functional utility, while Ireland would be captured in our memories, photos and videos.

We haven’t ruled out another trip to Ireland, but we have to factor in our debt repayments, school costs, regular costs of living and more, just like we did when considering the MINI purchase. Granted, I thought through all of them very quickly prior to buying the MINI, but I don’t want you to think it was an impulse purchase. We were thinking of the MINI well before we even sold the Malibu. We just thought we would buy a brand new one in another year.

Opportunity Cost in Your Daily Life

Opportunity cost calculations are part of every second of our lives. There’s always something better we could do with our time or money, but it’s up to YOU to calculate how that other thing is better.

You can figure out how much your time is worth, use that in all your comparisons, and then calculate the future benefits of the decision. For me, I had to determine whether spending about 15 hours or more per week in school or doing schoolwork for the next 2+ years is worth my time and money. The current cost is, of course, my time and money, but the future payoff is increased earnings and job opportunities. It’s hard to put a hard number on future payoff without some historical data, and even then the results are sketchy, but it’s worth it for big decisions.

One last major opportunity cost that I’ll bring up is one that many of my readers are very well familiar with: kids. We’ve done our own analysis of having kids, and continually reevaluate the decision. I’ve stated already that kids are probably THE biggest impact to your lives. Opportunity cost calculations and decisions abound when talking about kids.

Now I want to hear from you. What opportunities did you miss by choosing to do something else? How do you calculate opportunity cost?