Are you “paying for peace” at home? 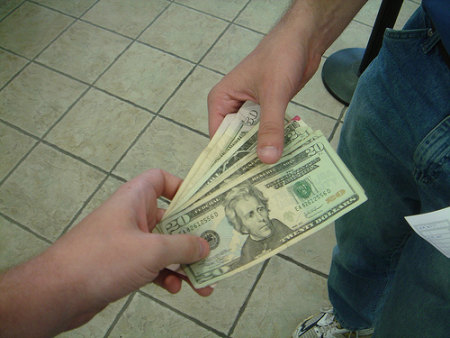 We have two water heaters at home. The last owners decided that when they built on another bathroom, they wanted dedicated hot water for that new shower. It’s not an efficient plan as now we have two tanks of water to heat, if we so choose.

Well, when we first moved into the home, Stacie laid claim to the new bathroom and relegated me to the (smaller) original bathroom. Since we both wake up at the same time for work, it worked out to each have our own bathroom to get ready. However, that also means we’re heating two tanks of water when we could be heating just one.

Why in the world would we waste money like this? One word:

Yep, we’re spending double on heating water when we could save all that money and use just one bathroom (the smaller one, connected to the main water tank). But we’re spending the extra money so we don’t have to argue or fight. As nice as saving money is, it’s also nice to have the bathroom all to yourself every morning, isn’t it?

To give some more details into our water heaters, one is a 60 gallon gas heater (the main one) and the other is a 40 gallon electric tank. We do save money on the electric heater by only running it for 3 hours per day by using an electric timer (similar to this one, installed by an electrician). We’ve also insulated both water heaters with an insulated “blanket” made specifically for water heaters (just like this one, found at any Lowe’s or Home Depot) to keep more of the heat inside the tank. I’d like to replace the electric tank with a tankless heater, but it’s still a relatively new tank and the additional costs aren’t worth it right now.

Do you pay for peace in your life?

Do you ignore your spouse’s or kid’s spending to avoid fights? Do you hide your debts to avoid confrontation? Do you keep duplicates around when you could be sharing (iPods, books, computers, automobiles)?

What could you simplify in your relationship, but would probably cause some battles at home?