You can’t trust that Carfax report!

You see Carfax mentioned everywhere. Everyone tells you to use them when shopping for a used car, right? They’re a household name for vehicle history reports, but I have a secret to share.

You know that we just sold our Chevy Malibu a couple weeks ago. Well, back on tax day (April 15) of 2005, we were in Pennsylvania for a wedding. While making a left turn across 2 lanes of traffic (per the bride’s father’s directions), an SUV jumped out of the right lane into the left (which was otherwise clear of traffic) and collided with us. Both vehicles had about $6,000 worth of damage. Ours was confined to the front-left of the vehicle, but there was a small bit of frame repair done.

I posted the car through Cars.com and chose the top option which gave me a “free” Carfax report that I could show to the public. I plugged in the VIN number and out popped the report. I scanned down, knowing it should show something bad. I got down to the damage report section, and here’s what it showed: 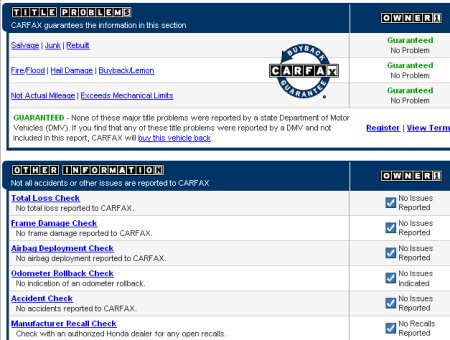 Yep, that’s right, No Issues Reported. No “Frame Damage” and no “Accident” was reported. Why? I don’t know. I had the damage repaired by Allstate, and it was significant enough to warrant a report to Carfax, but apparently someone dropped the ball big time. Carfax does note under the “Other Information” heading that “Not all accidents or other issues are reported to CARFAX”, which is their way of saying “Don’t blame us!”.

When I took the car in to various dealers, as well as Carmax, for a trade estimate, they immediately noticed the weld spots, and knew there had been an accident. Only a trained eye would have found them, but they knew what to look for and found it.

Another example of an incorrect Carfax report went the opposite way for me. I had a side-swipe accident in my Acura TL-S years ago. When I took it in to Honda to trade for a new Ridgeline, they informed me the Carfax report stated there was frame damage. I went home and looked at the itemized repair sheet and nothing related to frame repair was listed. However, I still negotiated a trade at $3500 above the diminished value of my Acura for the Ridgeline (at almost invoice price). If I wasn’t dealing with a “luxury vehicle” and specifically with Honda (who makes Acura), then I would have gotten the raw end of the deal.

So the lesson here is this: Always take the used car into a trusted mechanic for inspection before sealing the deal. Oh, and be sure to ask whether the car has been in any accidents. Don’t just trust the Carfax report alone.

So what’s your experience with Carfax? Have you been lied to, or felt cheated after buying a used car that turned out to be a lemon?

UPDATE: Thanks to commenter Super Saver for providing this link to a Consumer Affairs report on Carfax unreliability.