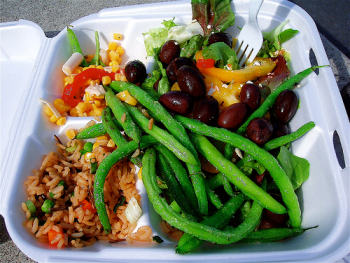 Many of you know those “pay-per-pound” buffets where you, well, pay for food by the pound. You find them at the local deli or supermarket, and they’re always flush with foods like fruit, chinese food, prepared pasta salads and other pretty or tasty foods. You get to choose from any of the foods, and any amount, and just pay for what you picked. But they have one major downfall:

Pay-per-pound buffet foods are made to be heavy!

The first few times I purchased food from these bars, I didn’t know any better. I loaded up their styrofoam container (the 3-partition one like in the picture above) with General Tso’s chicken, “sushi”, noodles and pineapple. I mistook this buffet for an all-you-can-eat buffet. But the strategies used to get your money’s worth at all-you-can-eat buffets aren’t the same as with pay-per-pound ones. Instead, you should use some different strategies, much like those to satisfy your tastebuds without expanding your waistline. When you’re paying $5-7 per pound, you want to get your money’s worth!

First, while some of you will think all of the thought I’ve gone through here just shows how cheap I am, then you’re right. But while I try to save money at the buffet, I also try to go for things that will satiate my appetite.

This is #1 because it’s the hardest to do by far. If any buffet manager knows his business, he knows to inject as much water into the foods as possible. Why? Because adding moisture is a cheap way to increase the weight. And since you’re paying by the pound, the more it weighs, the more you pays.

So here are some of the foods to avoid:

So what can you actually buy then? Well outside of pointing out that you shouldn’t really be buying your lunches and dinners at these buffets, I will say that you do have some options if you have no other choice.

Ok, the little list of good value foods is pretty bland and boring. But that doesn’t mean you’re reduced to eating cardboard for lunch. Instead, pick and choose your foods wisely so that you have a majority of “value foods” mixed with a few “yummy foods”. For instance, have a bed of lettuce, some tofu and green beans on the side, and some pasta salad or Chinese food (just one or two pieces). You get to savor the taste of the Far East while keeping some more cash in your wallet or purse.

#3 Weigh the food while dishing it out

If you’re not sure if the food is a good value, just pick up a piece of it with the tongs or spoon and feel how heavy it is. Compare it to other dishes’ weights. For example, I wasn’t sure whether I wanted some Chinese chicken or lasagna, so I picked up a piece of each and decided based on which felt lighter.

#4 Use the smaller containers

If you have the option of a large vs small container, go for the smaller one. Since you can fit less food inside the smaller container, you wont’ be tempted to get more food than you should eat or can afford.

So to recap, while you can find more frugal lunches elsewhere, like PB&J sandwiches, if you’re in a pinch, you can still find a relatively good value at these “pay-per-pound” buffets bars. However, you have to be really careful in what you buy or else you’ll find that 2 pounds of bananas looks a lot lighter than it really is. Don’t let your eyes be bigger than your stomach, because the only loser is your wallet.