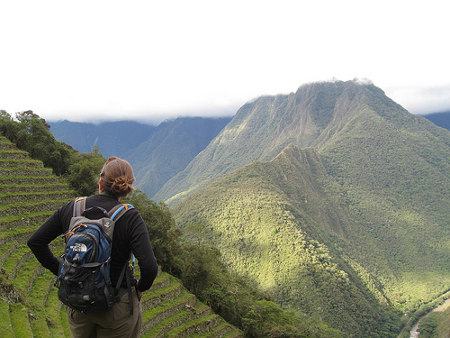 I’ve hated the word “paradigm” since I first heard it a few years ago. It was clearly a buzz word used by corporate executive wannabes to fluff up their presentations, or by smarty pants friends and colleagues who probably can’t even spell the word much less define it. I hated the sound of the word so much I refused to even look up the meaning myself.

Unfortunately, I can’t run from the word for my entire life, as was evidenced in my graduate management course recently. Since I was a captive audience to the video shown by the instructor, I was able to finally learn what “paradigm” means and how we can use it in our everyday vocabulary (at least in our heads, just don’t say it around me).

What is a Paradigm?

Simple put, a paradigm is a pattern or model.

When CEOs talk about changing paradigms in their company, they’re talking about changing the way people think or do things. People learn to recognize patterns so early in their development that by a certain age, many find it impossible to even think about something differently.

For example, DEC was a major mainframe server manufacturer. When the personal computer was introduced, they looked at it merely as a toy and nothing more. They were positive that mainframe processing was the way of the present and future and ignored the ever-increasing use of non-mainframe computing until it was too late. They just couldn’t fathom the possibilities of the PC and ended up going out of business because of their poor judgment.

Thousands of these examples exist throughout recent history, including Swiss watchmakers ignoring Quartz technology, newspapers ignoring the internet revolution, and even stockbrokers dismissing the impact on their business of low-cost stock trading options for normal consumers. You can probably insert numerous examples from your own history to see how people, organizations and even whole countries get left in the dust because they were unwilling to see the breaking of a new technology or way of thinking.

But it’s not just “old people” who can’t grasp transitions to new ways of thinking and acting. You get stuck in the way you react and think from a fairly early age. But some can just hold out a bit longer. Some of these “open thinkers” go on to be entrepeneurs and industry leaders, while the rest of us continue to toil away at our daily jobs, oblivious to what else is out there.

Shifting Your Paradigm (aka Changing Your Views/Habits)

Just like I hate the word “paradigm”, I also despise the phrase “paradigm shift”, but I’m ready to move on from that now that I understand paradigms now. Let’s see how they affect your own life.

What habits do you have? Has anyone in your personal or professional life tried to get you to agree to something, but you just couldn’t understand their reasoning?

Perhaps you’re stuck in a life of overspending and you just can’t see how you can cut back. You see cutting back as an insult and would rather die that be seen as “poor”. On the other hand, perhaps you can’t imagine spending money and you’re miserable. You’re a spendthrift with no friends because they all think you’re cheap.

I’m going to be the first to admit that I don’t have the answer to how you can change your life. What my intent here is to create awareness of paradigms and that they CAN be changed. You just have to be willing and open to change to see something in a new light. For instance, if you spend too much, perhaps you have to go through a serious money problem, maybe even foreclosure, before you can accept that you need help. For spendthrifts (the really “cheap” ones), perhaps the feeling of loneliness becomes so overwhelming that you just recognize the need for change.

To help you to relate to paradigms, or patterns of thinking and acting, in your own life, let me tell you about some in my own life:

I can’t imagine not working

I’ve held a job since I was legally able to work (age 15), with nary a gap in employment, except for a few summer months between sophomore and junior years in college. Whether it be delivering papers, flipping burgers, frying chicken, shelving Kmart goods, hanging lingerie, or whatever I’ve done since graduating college 8 years ago, I’ve always been employed.

Granted, this doesn’t mean I worked hard, it just means I’ve had a job. Also, I’ve never been fired (I was laid off from Kmart, but they closed shop just a couple months later). All my high school and adult life, I’ve known nothing else but punching the clock day in and day out.

My whole family (with some outliers) have only known stable 9-5 jobs. I didn’t grow up around entrepreneurs or business owners, unless you count my flea market uncle who couldn’t keep his attention long enough to keep a job. But I did learn something from that one “free thinker” in my life: plan and follow through.

While I still trend towards safe, stable employment, my pattern of thinking is slowly changing. First, I’ve started this blog. I haven’t taken many risks with it (slow, steady growth). I’m not sure if I’ll ever go freelance for work, but at least I’m dipping my toe in the water. First, though, I need to figure out what my passion in life is.

I can’t imagine being thin

The last memories I have of being thin were from when I was about 4-5 years old, living in Texas. Since then, I’ve been fat. I’ve been the heaviest kid in my grade from 1st through 12th grade (except late in my senior year when a kid with a medical problem got bigger than me).

But even though I’ve run a marathon, I’m still the same weight (~220lbs). I’m too lazy and I liketo eat too much. As much as I want to be thin, I can’t find the discipline to work out as much as I need, nor to eat smaller portions. But that’s the paradigm I’m stuck in. My brain sees the end product (sort of), but can’t conceive of the work needed to get there.

Granted, the fact that I ran a marathon with only 5 months of training with this fat body is a major shift in thinking, isn’t it? I had the motivation to train 3x per week before, so why can’t I do it again?

I don’t believe I’m worth the things I have

If you’ve heard me rant about people feeling entitled to things like money from the government, gifts from their parents or big promotions at work, then might guess it’s because I don’t think people should be given what they haven’t earned. Whether they’ve earned it through trust, hard work or love, they need to do something to get something.

Now getting back to my own life, for some reason I don’t feel like I’ve earned what I have. Things like my job, my house, my wife and even my family don’t feel like they’re truly mine. As for my job, it’s just been too easy. I haven’t had to struggle as much as others. For my house, signing papers wasn’t hard. I didn’t have to put my own blood and sweat into building it. Actually, it really isn’t mine; it’s the bank’s.

Regarding my wife, Stacie, well that just gets down to my consistent lack of self-esteem (see “I’m always fat” above). To have such a loving, caring and trusting woman by my side as my best friend and life-long companion baffles me beyond comprehension. I can’t imagine I was good enough for the universe to allow such a great person to attach themselves to me for life.

And for my family, that’s harder to explain. For some reason I’m the one in the family who doesn’t remember people’s names or how they’re related to me, and it makes me feel constantly disconnected from my family. I know they’re there, I know they love me, but I’ve always felt like an outsider and I’m not sure why. From their perspective, I think this might manifest itself as a feeling of “I’m too good for the family” when that’s the total opposite! Honestly, I haven’t really thought about it till I threw together this article, so those of you in my family who read this, don’t take it personally.

Shifting my own thinking

So how do I get out of my mental ruts and force a new set of thoughts into my head? It’s easy to say “if I haven’t gotten thin in the last 25 years, it’s not going to happen”, but that’s not the way to think.

I’ve already mentioned that the first way to change your habits or habitual thinking is to recognize them. Once you know the enemy, you can confront it. But the next step is creating a plan of attack or else that enemy will swallow you whole. For weight loss, I need to plan around my week so it’s both fun (so I’ll continue doing it) and convenient (so I have less excuses to bail out). For family, I could ask my family to explain the family tree. Perhaps someone (mom) could write out a history of the Dudes as a fun little side project (hint).

There’s tons of self-help books that tell you how to believe in yourself to change your life, but you can sit there all day reading them, but nothing will happen until you put the book down and try out their advice.

You CAN lose weight

You CAN get out of debt

You CAN be loved

You CAN change any one of your bad habits into something better; you just need to try. And then keep trying till it sticks. Don’t force it. Give your brain a chance to adapt. To understand. To change.