Freecycle Rocks! Guess what I got for free…

So this weekend, I’m browsing through my Freecycle emails when I spot something interesting. Someone is giving away a Garmin Quest portable navigation unit (MSRP $450-600, on sale for ~$250). They didn’t say it was broken or anything, just that all it had was the unit and the car charger. It was hours after it originally posted, so I assumed I wouldn’t get it, but I responded anyway with a request to get it. 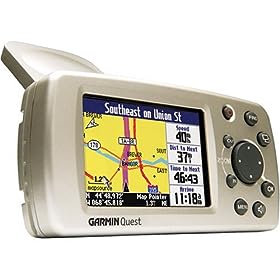 A few hours later (around 9:30pm on Saturday), I checked my email and saw a reply from the owner. Apparently the first person to respond didn’t come to pick up the unit, so it was all mine. Woohoo!

So at around 10pm, I woke Stacie from her nap (ok, she had passed out while watching the live-action Nodame anime) and headed out the door to pick up the Garmin. The offerer’s house was only 4 miles away and she had left it on the front porch. We got there, I ran up to the door and sure enough it was in a plastic Ziploc bag as she had claimed. I grabbed it, went back to the truck then drove away.

At the next stop sign, we got it into the cradle, plugged it in and powered it up. It works! It took a minute or two to locate and acquire the satellite signal, but it tracked our movement perfectly.

Luckily, since Stacie has a Garmin Forerunner 301 for running, the USB cable used to update software on the Forerunner also works with the Garmin Quest. When I got home, I went to Garmin‘s site, found the updates and got the latest software version. Unfortunately, I can’t see whether I can get map updates for free until their map section is back online. She didn’t give me the Map CD, but I’m willing to buy a new one if needed to get the activation code.

So I wanted to know why the lady gave away a $250+ unit for free so I emailed her. Her response was:

I couldn’t make it work like I wanted and didn’t like the fact that it couldn’t hold the whole country, map-wise. Maybe I should have sold it. If that’s the case, I guess you just got an amazing bargain.

I don’t know what she means about holding the “whole country, map-wise” because it does hold all of North America. I’m thinking that either she got it for free from a friend or relative and couldn’t figure it out or, worse case, it was stolen and she regretted it. I’ll give her the benefit of the doubt and opt for the first reason. Either way, I scored big on this freecycle deal!

Did We Need a GPS Unit?

No, we didn’t NEED one, which is why we’ve never bought one. We kept telling each other “our next car will have a navigation unit”, but when we bought a new car, we couldn’t justify spending $1000-2000 just to add the unit. We told ourselves we could just buy a portable unit for a fraction of the cost. But we still couldn’t justify spending that money because we could just Google Map it for free, or use one of our map books if needed.

But since we got this one for free, I’m not complaining. I’m still wary of listening to its directions because on my test from the grocery store to home, it told me to turn left on a street that I can’t turn onto without going over 2 large grassy medians. Can I use that as an excuse when the officer pulls me over? But the benefit will be being able to access maps when I don’t have a paper map handy, or if our paper map is wrong (like every time we go to New Jersey).

So the lesson here is to go give Freecycle a shot. It’s a message board format and very simple to use (once you get past the slightly complicated sign-up process). You can score big, or use it to dump your own unwanted or unneeded stuff on others!