Every Day is Valentine’s Day 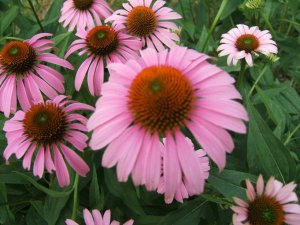 I’ve mentioned this before, but it seems more appropriate now that it’s Valentine’s Day. There’s no reason you need to wait for a “special day” to get your loved one flowers, a card, or to say “I Love You”.

When Stacie and I got married, without any prompting from her, I promised that I would always have fresh flowers for her in the house. From our first day of marriage (well, maybe the second since we moved on the first full day back from our honeymoon), I’ve had fresh-cut flowers in a vase on our table and I don’t empty the vase until I have replacement flowers. I’ve considered copping out and buying potted flowers that don’t die, but that wasn’t my intention when I promised, and neither were plastic flower arrangements. Nope, it has to be fresh-cut flowers.

Originally, I would buy a new bunch as soon as the old flowers started to droop a little, but then I got better at preserving the flowers longer. I’ve also learned what flowers to avoid because they droop and die quickly. Now I have flowers for 3-4 weeks before replacing them.

Granted, sometimes the flowers aren’t that “fresh”, and I’ll just drain out the water and let them dry, but they’re still pretty. But I’ve learned a bit about pruning them and freshening them up. I will admit, though, that I’ve been lazy a few times and Stacie has called me on it, but she’s never taken the gift of flowers for granted in the 4+ years since we were married. She looks at the flowers every morning while eating breakfast as they sit right in front of her.

If you’re thinking of making this promise yourself, I highly recommend it. Not only does it show your wife (or husband as I like certain flowers too) that you love her, but it also makes you look that much better in the eyes of your in-laws 😉

In my area, I tend to get flowers from Safeway or Giant, but avoid Bloom (an “upscale” Food Lion) because their flower selection is overpriced and pitiful. Who would have thought a store named Bloom would have a crappy flower selection? I tend to get flowers for under $8 per bunch, usually closer to $4. I stay away from the fancy “special” bunches as they run upwards of $10-15 or more, unless I want to splurge like on her birthday or around New Years when we had a party. I don’t recall all the flowers I get, but I’ve noticed that mums, tulips and marigolds are pretty hardy, but flowers with dainty petals usually aren’t.

Oh, and today on Valentine’s Day I didn’t even think about buying flowers. It’s time for a replacement, but I’ll wait until tomorrow or the weekend to get a bargain on flowers. No need to kill the budget when you can get the same beauty for half the price a day later.